War on the Periphery

One of the things that war can do (in a backhandedly positive way) is teach geography: 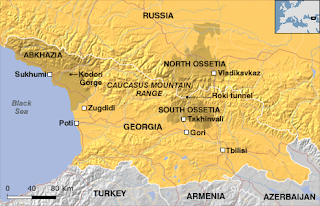 As one can see on the map, Georgia's province of South Ossetia sticks into the country like a sore thumb. The BBC has reported that Russian artillery and air strikes chased the Georgian military out of the provincial capital of Tskhinvali and there also attacks underway on the town of Gori (by coincidence, Stalin's birthplace). BBC also reports that elements of the Russian Black Sea Fleet sortied from its base at Sevastopol to blockade the Georgian port of Poti to block the importation of weapons; according to another report the ships were withdrawn after Ukraine threatened to close the port to the Russians.

To say that things are confused in the Georgian capital of Tbilisi would be an understatement, but it seems that even the opposition is rallying around President Saakashvili. Given the small size of the Georgian military, there doesn't seem to be all that much the Georgians can do, even as Russian bombs continue to fall.

Meanwhile, ITAR-TASS reports that Russian PM Putin visited the North Ossetian capital of Vladikavkaz to get reports from commanders in the field and brief President Medvedev. Although it's reported that President Saakashvili had ordered Georgian forces withdrawn from South Ossetia, the Russian report that they haven't received any cease-fire offer (which would be predicated on the complete withdrawal of the Georgians).

It's also being reported that separatist forces in Georgia's other problem province of Abkhazia may be mobilizing, determined to take advantage of the Tbilisi government's misfortunes. Abkhazian President Bagapsh declared that the West and the Ukraine are mainly at fault for the conflict (primarily because the Georgians are trained by the US and NATO, and they get their weapons from Ukraine).

This has been simmering for over 15 years now; a few shots, here and there, and much bad language. Now, there are reasons - nationalistic ones (Russia not wanting to get pushed around by the West any more), ethnic ones (South Ossetia is full of ethnic Russians), and economic ones (oil, of course). It's entirely possible that Russia may want to redraw the map you saw at the top of this post at Georgia's expense.

That leaves only the people caught in the middle of this whole sorry affair: 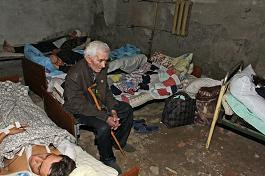 2. A rash of bombings by alleged Uighur terrorists took place in Kuqa county, part of the remote western Xinjiang Province; this follows an attack a few days ago in Kashgar that killed 16 policemen.

3. There are reports of clashes on the Afghan-Pakistan border that have so far killed a reported 100 Taliban militants.
Posted by Walt at 11:25 AM