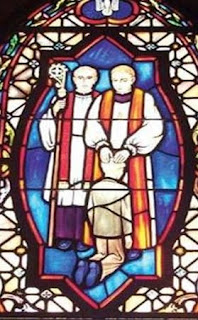 Better late than never? The Associated Press reports that the Archdiocese of Cincinnati has set forth a list of inappropriate behaviors for priests. No tickling, kissing or wrestling children. It also prohibits lap sitting, bear hugs and piggyback rides.

In other church news, Catholic nuns and priests set up a 98 ft inflatable church along the Adriatic coast vacation areas.

And speaking of church.... when bush attended church in China, it was a staged event with security people, political workers and people trained by the Chinese government to pose as believers.
Posted by Liz Blondsense at 10:55 AM