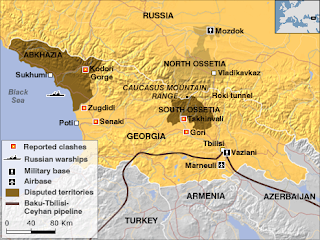 Since the fighting broke out in South Ossetia a few days ago, the Russians have apparently managed to shove the Georgian Army out of the separatist province (although the BBC reports bombs still fall on the border town of Gori). Fighting is also reported in Abkhazia, with the Kodori Gorge region (see map) the only area still under Georgian military control.

Georgia has asked for a cease-fire, and it has supposedly been accepted by Russian President Medvedev; however, one of the terms the Russians are demanding (the ouster of Georgian President Saakashvili) doesn't seem to be happening yet.

So much for the hot steel.

Now for the hotter air (just our luck - this is a rather warm August).

John McCain seems to think we should start bombing Russia, or at least send troops into Georgia to help the country that President Kim Jong Bush expressed solidarity with.

That's not going to happen, Johnny. The US military is still stretched awfully thin thanks to our military adventures in Iraq and Afghanistan (and I recall you're full-bore 100 percent behind all that). Not much else we can do from that quarter.

Barack Obama says we should deploy the diplomats and try to get both sides to talk it out rather than resort to crude firepower.

That might happen, Barry, if it weren't for the fact that we no longer have a moral leg to stand on. Since our invasion of Iraq, and the revelations of extraordinary rendition, open flouting of the Geneva Conventions and the use of torture - well, we've lost whatever moral capital the attacks of Black Tuesday might have gained us.

Secretary of State and Bush Trophy Chick Condi Rice was a Soviet expert, which might have stood her in good stead in this matter - unfortunately she's proven to be a better piano polayer and buyer of expensive footwear than a foreign policy "expert." Hang it up, Condi. You're done.

What Russia has done is take the US/NATO strategy vis-a-vis Kosovo and use it against us:
1. A breakaway province that wants repatriation with another country that is ethnically the same;
2. The country the province belongs to sends in troops to establish a firmer grip on the province;
3. We start bombing the country and send in "peacekeepers" to allow the separatist province to remain separate and perhaps amalgamate itself with the ethnically similar country.

The only difference here is shown in the picture above - that thick black line running from Armenia to the Georgian capital of Tbilisi and then into Turkey. That's an oil pipeline, funneling Caspian Sea oil to ports on the Turkish coast.

Russia has already proven that it can cause pain and angst in Europe by shutting off or curtailing its flow of oil and natural gas from the Russian steppes. I'm very surprised that the price of oil per barrel on the NYMEX hasn't gone over $120 again.

So, with French President Sarkozy in Moscow to make chin-music with President Medvedev, we wait and see.

With fighting continuing in the Kodori Gorge, and bombs still falling on Gori.
Posted by Walt at 8:26 AM