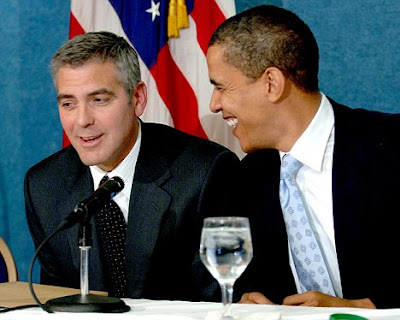 Screwy and Laughy? Oh, boys will be boys…


But is Barack Obama receiving private body language lessons from alleged, new BFF George Clooney? “NO, no, no!” cries Obama spokesman Ben LaBolt, who called a recent, suspicious story that appeared in the (London) Daily Mail) “an inaccurate report.”


According to the Daily Mail, Clooney and Obama “regularly chat on e-mail and via text message, and speak by phone at least twice a week.” In addition to citing the pair as being “extremely close” many Hollywood starlets and heavy hitters in this exclusive, metrosexual community including Brad Pitt, Ben Affleck and Matt Damon, offered to “help raise funds for Barack” but it was with George, in particular, that Obama struck up this very special, “amazing affinity,” according to one Democratic source.

“The source reportedly told the newspaper that in addition to speaking and body language advice, Clooney — a pro-Palestinian advocate — is informally advising Obama on Middle East issues, including advocating unconditional withdrawal from Iraq should Obama win office.”

Is Obama so full of bullets that he’s lead up like a Christmas tree?
Meanwhile, this Los Angeles Times article Obama Without His Script suggests that Obama looks a little lost without a teleprompter or presidential scripts. Why won't those hunters leave him alone?