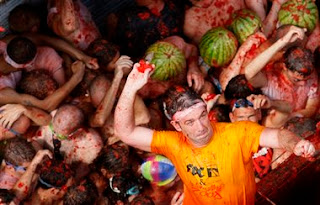 BUNOL, Spain (AP) — Tens of thousands of warriors for a day hurled tons of ripe tomatoes at each other to create a “human gazpacho” on Wednesday in an annual food fight that transforms this Spanish town into a sea of red mush.


Is there still time for all of them to book a flight to this Minnesota town for a certain upcoming convention?

Throughout Spain and Europe, “LA Tomatina” draws revelers from all over the world including Japan, Australia and the United States. An estimated 40,000 people took part this year.

Do you remember your first food fight?