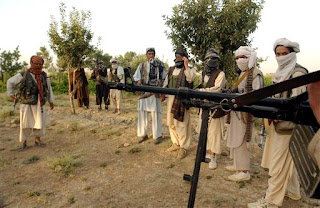 Afghan insurgents (very likely Taliban) attacked a new NATO base in Kunar Province, up in northeastern Afghanistan. Nine US troops were killed in what is described as a multipronged, coordinated attack. A suicide bomber killed some 41 people in another part of the country.

Oh, and Pakistan has told us that we are not welcome to go hunting for Osama bin Laden in Pakistan. Like that ever stopped us before - anyone recall us bombing the snot of eastern Cambodia to destroy Vietcong and NVA positions there, in defiance of our pledges to respect Cambodia's neutrality and sovereignty?

Over in Iraq, the nascent Status of Forces Agreement (a nice cushy SOFA for our troops) had to be abandoned in favor of a more interim and temporary agreement that will bridge the gap between the expiration of the UN mandate in December and the removal of US troops in 2009.

Essentially, this defers any negotiations on the SOFA until the next Administration takes power, illustrating again the penchant of the Bush Regime for kicking the can a little further down the road. Sure, they'll leave it for John or Barack and let them take the blame when it collapses around them. Meanwhile, the worsening conditions in Afghanistan are putting pressure on the regime to withdraw more combat troops from Iraq faster, so they can deal with the new troubles.

But all is not gloom and doom and failure for Generalissimo Bush and Field Marshall Cheney. A report from the Times (of London, naturally) reveals that Bush gave Israel the "amber" light to further needlessly complicate matters by attacking Iran's nuclear facilities. What fun, eh? He'll back Tel Aviv if negotiations break down - and therefore we see a self-fulfilling prophecy begin, folks. If you're already champing at the bit to attack someone "if negotiations break down," then it becomes necessary to see to it that the talks do break down.

The scale is sliding more and more across from "Fail" to "Epic Fail" regarding Bush's military adventurism.
Posted by Walt at 2:21 PM