Appearing angry and reading from a prepared text, Olmert said, "I was forced to defend myself against relentless attacks from self-appointed 'fighters for justice' who sought to depose me from my position, when the ends sanctified all the means."
Olmert, whose term was to end in 2010, said he would not run in his party's primary election, set for Sept. 17,

and from one of my favorite blog posts of all time......


Never Trust a Man with a Comb-Over
by Edgar J. Steele

Never trust a man with a comb-over. Yes, that self deception in which a balding man deludes himself into thinking that growing his hair out to an incredible length on one side of his head, then simply flinging it over to the other side, will cause others to think it looks as good as it does to himself. For example, take this fellow: 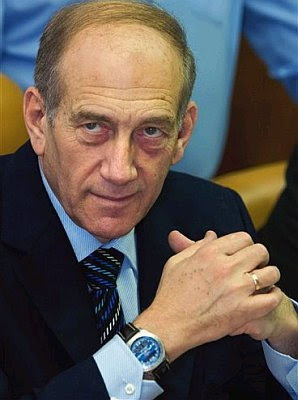 He actually thinks we don't notice that he is bald all the way to the back of his skull. He thinks that, somehow, we will believe he has a normal head of hair. He probably thinks that young girls my daughter's age find him attractive. I assume that a disproportionate number of perverts, child molesters and murderers of women and children have comb-overs - not to imply, heaven forbid, that this particular fellow should be viewed in that light.

Really, now - would you buy a used car from this man? Seriously - think about it. Someone who thinks he can delude you with something as obvious as a comb-over? He could persuade himself that you might be deceived by anything he said or did, don't you think? Look at those close-set, sneaky eyes. In this picture, you can almost hear him chortling over some poor sucker whom he just fleeced, as he rubs his hands together, Scrooge like. Or, perhaps, he is plotting the abduction of some poor innocent and is considering where to hide the body.

What a Nation's Leadership Says About its Character

Coincidentally, the man with the comb-over pictured above happens to be Ehud Olmert, Israel's current Prime Minister and architect of the genocidal frenzy that has been taking place in both Palestine and Lebanon. Past Israeli Prime Ministers have included self-confessed assassins (Begin) and mass murderers (Sharon) who thought themselves fit to mingle in amongst normal, decent people. That such men are selected to lead should tell you a great deal about Israel. Not that choosing a boob like Bush to lead America is not just as telling. H. L. Mencken (1880-1956) once observed:.............

As democracy is perfected, the office of president represents,
more and more closely, the inner soul of the people.
On some great and glorious day the plain folks of the land
will reach their heart's desire at last
and the White House will be adorned
by a downright moron.

Posted by JerseyCynic at 4:44 PM