Just who does he think he is anyway? The president's brain? 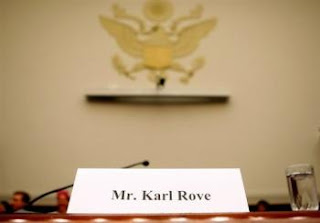 Not only did KKKarl Rove refuse to appear before the House Judiciary Committee, he skipped out of the country. According to Think Progress, "Rep. Linda Sanchez (D-CA) said Rove’s attorney “never mentioned” this trip to the committee. Rove’s bogus claims of executive privilege were rejected by the Committee as “not valid” by a 7-1 vote. The committee gave Rove five days to comply with the subpoena."

Maybe not all of you feel the way I do when I read such things, nor do you recall with horror the years of blow job testimony against Bill Clinton, but I just have to rant here for a second...

I had an impressionable child at home during the Lewinsky debacle. I literally could not turn on the news in my house for I don't know how long. The media and the congress were jerking off to the antics of Bill Clinton and I wasn't ready to have to discuss oral sex with a 10 year old at home. Most people I knew at the time were simply appalled at the media coverage of it all. It's not like we were shocked at what he had done or anything, because everyone figures that world leaders do all sorts of sordid crap behind closed doors with their mistresses... we just didn't want to hear about it at supper hour. Looking back at how impossibly irritated I was by the whole scandal, that it had to be on the freaking news day in and day out and how it was a national embarrassment to put the president on the stand for such nonsense that had nothing to do with running the country and then to impeach him because he freaking lied about a blowjob... and now this complete pig faced AH is trying to get away with "executive privilege" on an issue as important as politicizing the fucking justice department which actually has an effect on the whole country, then I am just outraged to the max.

If Bill Clinton had to be subject to such interrogation, then KKKarl Rove ought to be arrested and forced to testify about EVERY conspiracy he was a party to.

/rant
Posted by Liz Blondsense at 7:08 AM