I-Lie Joe's Holy War: "There are terrorists out there who really do want to destroy our civilization and murder millions of Americans," LIEberman said

I stubbed my toe tripping over the this morning's paper whilst trying to maneuver the garbage can to the street.

After cursing the paper for being in the way of my garbage run, I decided to give the front page a quick glance......
Here's the front page of The Hartford Courant:

ToP of the paper is (lower) G.I .Joe's quote: "There are terrorists out there who really do want to destroy our civilization and murder millions of Americans"

Under this quote, is the LARGE and oh so BOLD headline across the page: 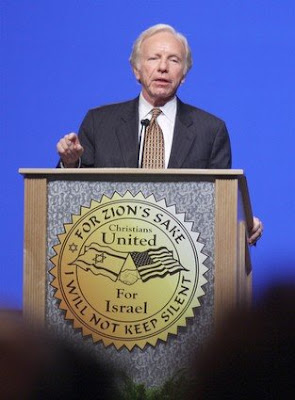 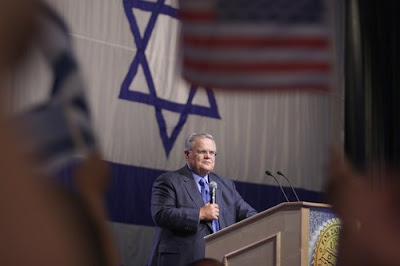 (that flag looks a little blurry - eh? Well, in the paper, it's barely even visible)

Lieberman again drew a parallel between Hagee and biblical figures, this time saying biblical heroes, unlike the demigods of Greek mythology, "are humans — great humans, but with human failings." Lieberman said that Moses had his shortcomings, too.

"Dear friends, I can only imagine what the bloggers of today would have had to say about Moses and Miriam."

(I never knew about Miriam until I read this Joe, so I guess I have nothing to say)

and for those of you in need of a Bible 101 refresher course, here, IN FULL, is
Lieberman's Speech To Christians United For Israel

Sounds like the opening to a wedding ceremony, doesn't it? I wonder if he gave the Courant the headline to use.

You have gathered this evening, united by faith and a commitment to the State of Israel -- sixty years after its miraculous rebirth in the Holy Land.

But you know well that Israel's existence did not begin sixty years ago. It began four thousand years ago, as told in Genesis 12:1, when God told Abraham: "Leave your land, your birthplace, and your father's house and go to the land that I will show you. And I will make you a great nation. I will bless you and make your name great, and you shall be a blessing. I will bless those who bless you, and I will curse him who curses you."

Each one of you has heard that call, and so you have come here today to the capital city of the greatest country in the world to keep that promise and advance that mission. I am honored to greet you with the timeless words of welcome which were extended to the pilgrims who came long ago to the Holy Temple in Jerusalem: "Bruchim Habaim B'Shem Hashem." Blessed be you who come in the name of the Lord.
n its struggle today, thanks to you and so many others, Israel may sometimes feel lonely, but it is surely not alone. With your help, with America's help, and with God's help--Israel will again prevail.

In the United States, solidarity with Israel runs both deep and broad. It is a feature of our landscape as distinctive and enduring as the Rocky Mountains and the mighty Mississippi. It stretches in time from President Washington and the Founding Fathers to President Bush and members of Congress of both parties.

There should be no mystery in this. Americans and Israelis alike are the children of freedom and know alike that our rights to life and liberty come from our Creator.
We both pride ourselves on our democratic ideals, our culture of economic opportunity, and our political pluralism. These are the values we cherish and the values that define not just who we are but who we aspire to be.

Today we Americans also recognize that Israel's struggle against terrorism parallels our own. The same violent Islamist extremists that seek the destruction of Israel also have attacked our own citizens at home and abroad.