Another insult to Democrats and humankind 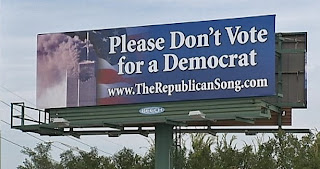 Some complete moron, Mike Meehan put up a political billboard in St. Cloud Florida that reads, "Please don't vote for a democrat." Big deal? Right? Well it's written over the image of the burning World Trade Center on 9/11. Meehan says he's trying to help Republicans. How? I don't have a clue, but I was a Republican on that day and a New Yorker and I was pretty pissed off at my government/country for letting this happen. We were the ones asking questions about how this could happen when the rest of the country was buying the BS from Ari Fleischer.

The billboard carries Meehan's website therepublicansong.com where it turns out that he's some hack looking for publicity for his music career (which I imagine has gone down the toilet by now.) Who said "patriotism is the last refuge of a scoundrel?"

So I went to his website which opens with this paragraph:

The Republican Song title is actually “Please Don’t Vote For a Democrat.” The song was written, played, sung, produced, and recorded by myself. I claim to be a man of God and like millions of others, I love this great nation, “The United States of America.”

and I am simply offended by it. You don't have to be a god fearing person to love the country. In fact if you love the country, you should try to keep it free and safe. Not institute a police state. Democrats love America too and many are believers in God. Just not the nasty vindictive god of money and power at all costs.

What outrages me is the fact that he used the burning towers on his billboard because I am tired of the fear mongering used by people in this country to achieve their agendas. If their agendas were any good, they would not have to scare people into following their lead.

Secondly, NY is not a city that votes for Republican presidents so he can take his fucking NY skyline off his red state billboard. He may recall, since he likes to recall what happened in NY on 9/11, that NYers overwhelmingly rejected the RNC in 2004. If you asked anyone here, they were disgusted with the Republicans. So if anyone wants to show solidarity with New Yorkers, either they can refuse to support Republicans or bite me.