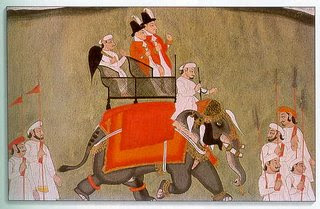 “Human beings are not commodities. They are not goods. They grieve, and suffer and feel despair. They raise children and struggle to maintain communities. The growing class divide is not understood, despite the glibness of many in the media, by complicated sets of statistics or the absurd, utopian faith in unregulated globalization and complicated trade deals.”
-Chris Hedges

When will Americans rise up against the blowhardy corporate and media elites, pillaging through town like rajas on elephants, waging war on our educated middle class on their race to the trough?


The disparity between our oligarchy and the working class has created “a new global serfdom” that has, for the first time in the history of the United States, imported a third world caste system to the United States that legally--yes legally – gets away with selling out your job. With the collusion of immigration attorneys all across this country, a cadre of insufferable, hubris drenched elites are handing over millions of American white collar jobs along with their foreclosed homes to imported third world workers under the ruse or myth of a Great Labor Shortage.


According to this insightful Wharton study by Peter Cappelli

“Making the assumption that a labor shortage is on the horizon is a serious mistake because corporations and public-policy makers may make important decisions based on such an assumption. “The bigger the corporation, the more they buy into the labor-shortage argument,” says Cappelli. “The bigger companies are the ones with the ability to think long-term and worry about the future.”

In his excellent keynote address last week at Furman University, Chris Hedges explains how the corporate welfare state is increasingly ruining the lives of millions of Americans. Meanwhile, it is ironic that the majority of people in this country continue to be mesmerized by the very corporate media and their political enablers who are running this presidential election, convincing the plebes to agonize over the faux choice between the Democratic or Republican candidate.


Not only does Hedges detail the rise of the corporate welfare state via the Reagan years, deregulation, Iraq, Halliburton and private security firms along with the simultaneous erosion of our civil liberties, but his speech ultimately begs the question “where can we start to dismantle this orchestrated war against America’s middle class” with this alarming observation:

“As the pressure mounts, as this despair and desperation reaches into larger and larger segments of the American populace, the mechanisms of corporate and government control are being bolstered to prevent civil unrest and instability. It is not accidental that with the rise of the corporate state comes the rise of the security state. This is why the Bush White House has pushed through the Patriot Act (and its renewal), the suspension of habeas corpus, the practice of “extraordinary rendition,” the warrantless wiretapping on American citizens and the refusal to ensure free and fair elections with verifiable ballot-counting. It is part of a package. It comes together. It is not about terrorism or national security. It is about control. It is about their control of us.”

With the rise of the profitable, dubious “security software” sector (Google search for these players) the high tech community has created an economic growth engine unto itself. And that’s the problem: unto itself and the third world by cutting out America’s educated middle class. As Hedges points out, it is precisely this simultaneous erosion of our civil liberties and the war on the middle class that has corporate elites scrambling to the trough by kicking the educated middle class to curb with the help of their bought off "new media" and politician friends.


What kind of corporate, self described “elitist” cultural mindset “clings” to this myth or ruse about a great labor shortage and why do they do it? More green $$$ for them by creating surveillance technologies (among other things) that enhance nobody’s lives but their own and the joy of ruling over a subservient, foreign class of imported workers who they can pay less to do the “jobs Americans won’t do.” Oh, these are the same people who are stirring the pot over Mexican border “illegal immigration” in HOPES of nobody seeing that the war on America’s educated middle class goes unnoticed while they loot what’s left of this hijacked economy.


Until we take a closer look at the sociopathic behaviors and bullying personalities and demand a stop to the collective harm these greedy, insufferable elites continue to inflict on our long-lost civil society by outlawing anti-American worker policies and practices, there is no reason to believe that anything will change or that any Uprising will ever take place.


For example, what prompts a human resources individual (typically the nosiest, pettiest lot although I do know three who are actually great people) or a CEO to behave in such a petty, jealous, and threatened manner as to willingly discard the notion that Americans who have invested heavily in their educations indeed do have a right to work in companies where they can apply their training for the greater good? Again, the Hedges speech is an excellent summary of where this country is headed if the people in it don’t rise up against these greedy frat boys and nosey brunhildas in these non-producing, utterly useless HR and legal departments. The Hedges speech stops short of, however, answering implicit questions about what, if anything, can be done to stop it.

Q. So what can Americans begin to do about the millions of disappearing white collar jobs being handed over to the third world’s so-called “best and brightest” under this great Labor Shortage Myth crafted by the granddaddy of corporate greedsters, Bill Gates and the preening sycophant Tech Lobby and their bogus policy studies?


A. Halt the practice by specifically stopping the H-1B visa scam that has created a growth industry for sleazy law firms who profit alongside greedy corporate elites by kicking your neighbors to the curb from jobs that they hand over to imported third world workers. When jobs are scarce, cut off this and other green card immigration programs that continue to import workers when there are not enough jobs to employ our own citizens.


In his Computerworld article, Patrick Thibodeu explains how The Bush administration's recent decision to extend the amount of time foreign nationals can work in the U.S. on student visas is being challenged in a federal lawsuit by H-1B visa opponents. This lawsuit is a pivotal step, however one of many needed -- that must succeed in order to stop these greedy frat boys from legislating legal slave labor practices that drive down wages and attack America’s educated middle class. To learn more about this Optional Practical Training (OPT) lawsuit and what you can do to help, visit NoSlaves.com and read this informative article entitled Law Firm Sues DHS Over Illegal Expansion of Guest Worker Program.


Back to Chris Hedges…Aside from the highly orchestrated complicity of academia and corporate business and media elites who preside over this Department of Disinformation, Hedges explains
“Everything from federal prisons, the management of regulatory and scientific reviews, the processing or denial of Freedom of Information requests, interrogating prisoners and running the world’s largest mercenary army in Iraq has become corporate. And these corporations, in a perverse arrangement, make their money off of the American citizen.”


Hedges continues to provide alarming estimates from Credit Suisse analysts that put the jigsaw pieces together of this deliberate exodus of American jobs and the subprime mortgage crisis in this war on the middle class:

“the number of subprime foreclosures in the United States over the next two years will total 1,390,000 and that by the end of 2012, 12.7 percent of all residential borrowers in the United States will be forced out of their homes. The corporate state, which as an idea is an abstraction to many Americans, is very real when the pieces are carefully put together and linked to a system of corporate power that has made this poverty, the denial of our constitutional rights and a state of permanent war inevitable. The assault on the American working class-an assault that has devastated members of my own family- is nearly complete. The U.S. economy has 3.2 million fewer jobs today than it did when George Bush took office, including 2.5 million fewer manufacturing jobs. In the past three years, nearly one in five U.S. workers was laid off. Among workers laid off from full-time work, roughly one-fourth were earning less than $40,000 annually. A total of 15 million U.S. workers are unemployed, underemployed or too discouraged to job hunt, according to the Labor Department. There are whole sections of the United States which now resemble the developing world. There has been a Weimarization of the American working class. And the assault on the middle class is now under way. Anything that can be put on software-from finance to architecture to engineering-can and is being outsourced to workers in countries such as India or China who accept a fraction of the pay and work without benefits. And both the Republican and Democratic parties, beholden to corporations for money and power, allow this to happen.”


Hedges does offer a few broad strokes by wisely asserting that “voting is not enough” and that we of course, should all vote. But voting for a candidate who stands on these issues is a “starting point” and if we truly want to reclaim America, it is the people who must lobby and advocate for the “dissolution” of the WTO, NAFTA, and the Council on Foreign Relations for any true progress takes place. Remember all of those annual wine and cheese fests in Davos?


The most beautifully stated however shocking summation of Chris Hedges’ speech follows:

“We are being impoverished-legally, economically, spiritually and politically. And unless we soon reverse this tide, unless we wrest the state away from corporate hands, we will be sucked into the dark and turbulent world of globalization where there are only masters and serfs, where the American dream will be no more than that-a dream, where those who work hard for a living can no longer earn a decent wage to sustain themselves or their families, whether in sweat shops in China or the decaying rust belt of Ohio, where democratic dissent is condemned as treason and ruthlessly silenced. I single out no party. The Democratic Party has been as guilty as the Republicans. It was Bill Clinton who led the Democratic Party to the corporate watering trough. Clinton argued that the party had to ditch labor unions, no longer a source of votes or power, as a political ally. Workers, he insisted, would vote Democratic anyway. They had no choice. It was better, he argued, to take corporate money.”

Yup. The Big Dog got that part right: It was better to take the corporate money -- better for elites, but much worse for the majority. Did you say you want a revolution?

Like rajas on elephants, the next time you see one of those ostentatious, supersized black Cadillac Escalades with one of those miserable, pretentious women behind the wheel with the frozen “I Got Mine” facial expression with the “Keep Tahoe Blue” bumper sticker fixed over the polluting motor boat hitch, think about the promise of all this “hope” going around and maybe, maybe voting for a candidate who dares to speak about the issues that Chris Hedges so eloquently, if not shockingly, summed up to the South Carolina college students who deserve much, much better in this greedy elitist war on our educated middle class citizens.