He Regrets Being Viewed As A War Monger 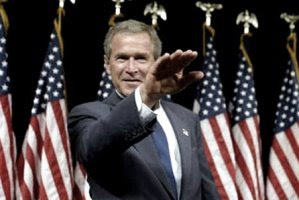 From the Times Online:

President Bush has admitted to The Times that his gun-slinging rhetoric made the world believe that he was a “guy really anxious for war” in Iraq. He said that his aim now was to leave his successor a legacy of international diplomacy for tackling Iran.

In an exclusive interview, he expressed regret at the bitter divisions over the war and said that he was troubled about how his country had been misunderstood. “I think that in retrospect I could have used a different tone, a different rhetoric.”

Phrases such as “bring them on” or “dead or alive”, he said, “indicated to people that I was, you know, not a man of peace”.
blah blah blah

Then why not STFU about the war with Iran?
Posted by Liz Blondsense at 9:05 AM