The BUSH CARTEL... doh! I mean the SAUDI'S are planning to increase their Oil Output to the highest EVER! 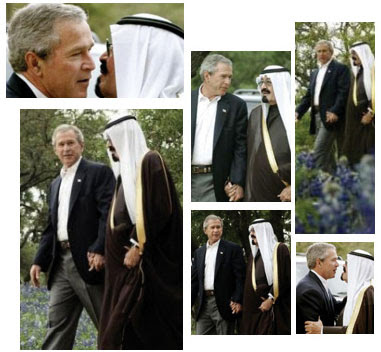 The increase could bring Saudi output to a production level of 10 million barrels a day, which, if sustained, would be the kingdom’s highest ever. The move was seen as a sign that the Saudis are becoming increasingly nervous about both the political and economic effect of high oil prices.

While they are reaping record profits, the Saudis are concerned that today’s record prices might eventually damp economic growth and lead to lower oil demand, as is already happening in the United States and other developed countries. The current prices are also making alternative fuels more viable, threatening the long-term prospects of the oil-based economy.

You watch, King George will "save the day" and be back in the good graces of many as he exits the White House.
Posted by JerseyCynic at 10:24 AM