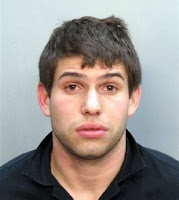 The Miami Herald reports that the 22 year old munitions dealer with a $300 million Army weapons contract, Efraim Diveroli and 3 of his employees were arrested for selling Chinese made munitions to the DOD. Apparently the DOD employees can't tell where stuff used to kill people was made. Oh and it's really old stuff too. The munitions were to be sent to the forces in Afghanistan to fight the Taliban. He and his employees are charged with violating the Arms Export Control Act. He misled the gubmint by saying that the munitions were made in Hungary and not China. It's illegal to use Chinese made weapons and cartridges.

Diveroli started selling munitions to the Army when most kids his age needed a guardian's signature to get a wisdom tooth extracted. He has a delightful history with the Miami-Dade police. He beat up his girlfriend, he beat up the valet parker at his condo, carried a fake license and most recently was arrested for drunk driving. But I'm sure he's just a very nice young man.
Posted by Liz Blondsense at 8:01 AM