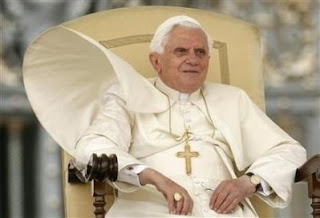 From the story at Yahoo News: The Vatican issued its most explicit decree so far against the ordination of women priests on Thursday, punishing them and the bishops who try to ordain them with automatic excommunication.

"The decree was written by the Vatican's Congregation for the Doctrine of the Faith and published in the Vatican newspaper L'Osservatore Romano, giving it immediate effect.

"A Vatican spokesman said the decree made the Church's existing ban on women priests more explicit by clarifying that excommunication would follow all such ordinations.
[...]

"The Church says it cannot change the rules banning women from the priesthood because Christ chose only men as his apostles. Church law states that only a baptized male can be made a priest."

Two thousand years ago in Palestine, women were not allowed to be seen gallivanting with a group of men, but there is Gospel proof that women were indeed devoted to Jesus and so much so that while the men were behaving like babies after Jesus' crucifixion, the women went out to investigate. Surely they must have been devoted disciples themselves to brave being caught hanging around Jesus' tomb on Sunday morning. And let us not forget the bum rap Mary of Magdala took for centuries- labeled a whore for hanging around with Jesus... and the early church fathers were so anti-women that they had to make Jesus' mother a virgin despite evidence to the contrary.

According to the Gospels, after Jesus was crucified and died, the male apostles went and hid. For they were not brave. (Throughout the Gospel's Jesus has to admonish their chickenheartedness, but that's another post.) The four Gospels differ, but there were definitely women who went to Jesus' grave. John's Gospel has one, Matthew's has two, Mark's has three and Luke's has 5 or more. They arrived on Sunday morning around the break of dawn.

John 20:1
The first day of the week cometh Mary Magdalene early, when it was yet dark, unto the sepulchre, and seeth the stone taken away from the sepulchre.

Matthew 28:1
As it began to dawn toward the first day of the week, came Mary Magdalene and the other Mary to see the sepulchre.

Mark 16:1
And when the sabbath was past, Mary Magdalene, and Mary the mother of James, and Salome, had bought sweet spices, that they might come and anoint him.

Luke 24:1, 10
Now upon the first day of the week, very early in the morning, they came unto the sepulchre, bringing the spices which they had prepared, and certain others with them.
...
It was Mary Magdalene and Joanna, and Mary the mother of James, and other women that were with them, which told these things unto the apostles.

So basically, if it wasn't for the WOMEN, no one would have known that Jesus was risen from the dead, let alone the "devoted" apostles.

see the Skeptic's Annotated Bible
Posted by Liz Blondsense at 6:36 AM