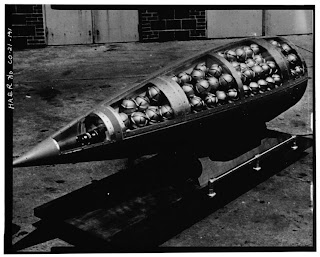 While representatives of 100 governments gather in Dublin for talks about a global treaty to ban the use of cluster bombs, teh US, the king of cluster bombs worldwide, along with Russia, China, Israel, India and Pakistan stayed away from the talks. Read teh interview at Democracy Now while I puke.

I hope no one tells me that there isn't some sort of conspiracy that millions of Americans are talking about the next American Idol and what a twerp David Archuletta is (but it would be fitting if he won because we Americans certainly are the uninformed weenies of the world) while we have been overtaken by the most UNAMERICAN government in our history. For gawd's sake we're like the freaking antichrist of governments. We're sending uranium to Saudi Arabia for uh nuclear reactors, that's right, nuclear reactors, that's the ticket.

Hey did you know that 30% of all aluminum produced is for the cluster bomb? Alcoa isn't just for wrapping leftovers.
Posted by Liz Blondsense at 6:48 AM

Email ThisBlogThis!Share to TwitterShare to FacebookShare to Pinterest
Labels: democracynow.org