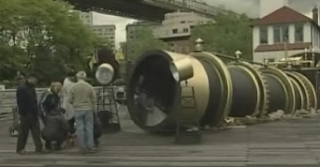 Check out this story


Here's a tidbit from the story:

"If you believe artist and inventor Paul St George then his "Telectroscope" connects New York and London via a (very) long tunnel running through the earth's crust, with the images bouncing back and forth using mirrors.

The other explanation is that it is all done by optical fibres - take your pick.

Each end has a giant telescope-like construction which appears to punch its way out of the earth.

There are dials, and levers, and thermometer gauges on the side of the 20m long brass and wood construction.

Peer into it and you can see people on the other side of the Atlantic.
Wave at them, they wave back at you.

Write on the whiteboard, and ask a question, and they will write back."

I think I'll have to take a ride to Brooklyn this weekend to see this thang. But first I'm off to the air show.
Posted by Liz Blondsense at 8:38 AM