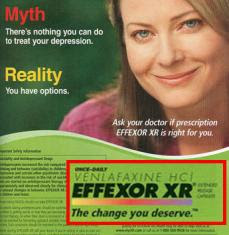 They swiped the registered advertising slogan of Effexor XR, an antidepressant, "The Change You Deserve™" for the GOP's new slogan. Between the fact that they 1) stole a registered slogan from a company, 2) that it happened to be an antidepressant (where the side effects describe the GOP more than the positive aspects of the drug) and 3) that the GOP already f*cked us collectively so that it's completely laughable that anyone would trust the GOP to determine anything for anyone, ever.... wait, it gets better

"And when the Food And Drug Administration reviewed the ad copy that included the tagline, "The change you deserve," it took issue with Wyeth Pharmaceuticals, which manufactures Effexor, saying that the company made "unsubstantiated superiority claims." Sounds like the GOP have picked an ironically accurate tagline for their efforts!"