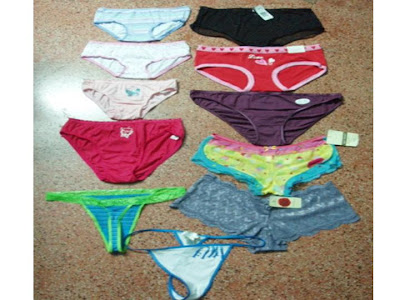 - Pledge to Send Your Panties Today-

The next time you think you’ve got it bad, here’s a reality check for what’s going on in the lives of the women in Myanmar and how you can help them.

Burmese superstition holds that contact with women's panties can sap a man's power right out from under their John Thomas Myanmars, and activists claim the fear is shared by the leaders of the country's military regime.

That’s why a Canadian organization called Panties for Peace is requesting that you go to your drawers, take out some panties, and write a little message on them, like

No booty for Burmese junta or

Than Shwe is ucked-fay or

Burmese babes’ bums are best or

Bwhahaha, Sap THIS! or

Moms of Myanmar rock! or

Come closer, I can’t SAP you! or

How about a Burma shave? or

"If you don't believe me, you can bring this to the Yangon airport - you will be shot dead," said activist Thet Thet Tun as she clutched a pair of white undies. "So we use this against them."

Tun, who fled the country seven years ago, described a society suffocating under state control and widespread misogyny.

Spearheaded by a pro-democracy group based in Thailand, the campaign was launched in the fall to draw attention to human rights abuses against women in the country. At the time, the junta was violently suppressing a pro-democracy uprising by the country's Buddhist monks.

Please donate generously to Panties for Peace and if you don’t have any because you’re a man and you haven’t “had any” because you’ve been shit out of luck for a while, don’t worry. Just sew up the seam of your boxers or briefs, write a little ditty and send them to Panties for Peace and help all women of the world SAP those sick, backwards, murderous bastards from power once and for all!