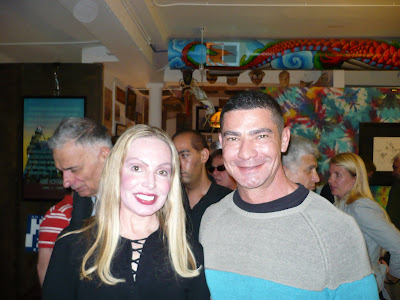 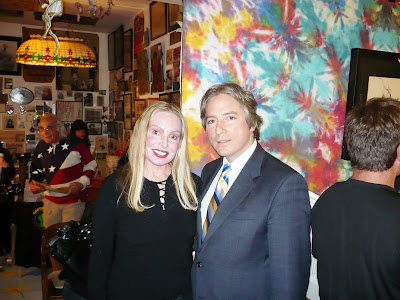 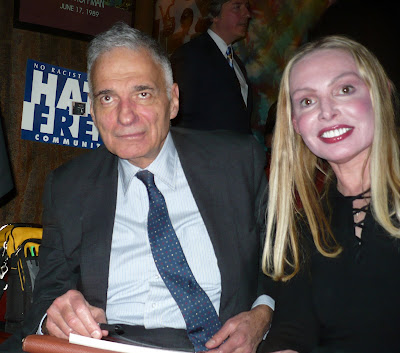 Adopt single payer national health insurance
Cut the huge, bloated, wasteful military budget
No to nuclear power, solar energy first
Aggressive crackdown on corporate crimeand corporate welfare
Open up the Presidential debates
Adopt a carbon pollution tax
Reverse U.S. policy in the Middle East
Impeach Bush/Cheney
Repeal the Taft-Hartley anti-union law
Adopt a Wall Street securities speculation tax
Put an end to ballot access obstructionism
Work to end corporate personhood
The Nation -- "Ralph Nader is making every effort to be the most serious candidate for president this year, and he is succeeding despite the dismissals of the political class and the media that sustains it." In the meantime, does anyone still seriously believe that the three new world order stooges, McClob, are standing up for you, dear reader?
On Mothers Day, I attended a Nader/Gonzales 2008 fundraiser in San Francisco where once again, yours truly had the privilege of meeting with the candidate along with vice presidential running mate, Matt Gonzales, to hear them and discuss with them the issues facing the majority in this country. For those of you outside of the SF Bay area, the awesome Matt Gonzales narrowly lost the 2003 mayoral race to the insufferable corporate welfare king Gavin Newsom, a blown-dry, connected Democrat who had a considerably larger budget and the outspoken support of other high profile corporate welfare whores Bill Clinton, Al Gore and Nancy Pelosi.
Nader and Gonzales gave compelling speeches that addressed REAL issues (see above chart) and concerns for the people of this country as opposed to the media black-out corporate elites and their media and “new media” whores who continue to silence the candidate. The only thing separating yours truly from the rest of my Lefty pals on the issue of my voting for a third party candidate is the perpetuated myth of a wasted vote and yet, no matter what third-party critics claim, the fact is that 9 million registered Democrats did not in fact vote for Al Gore in 2000. More telling is that over 200,000 registered Democrats did not vote for Al Gore in Florida alone. What's more, another 600,000 registered Democrats in Florida did not even vote at all! On top of it, this is the United State of Fucking America and how dare some asshole tell anyone they can not run for office…. Like Nader says, if the Democrats can’t win against these dirt bag Repubs, then they don’t deserve to win anything.
Many people continue to ask “why is Nader running?” The answer is that he actually raises issues that no other candidates would touch. Nader talks about issues on the campaign trail that affect people. For example, have you heard McClob talk about the shortsighted Pennsylvania Turnpike fire sale lease to Spanish firm Abertis Infraestructuras, of Barcelona? No. But Nader did. BTW, the PA Turnpike lease means
that if the lease agreement went into effect today, the cost of traveling the turnpike from Ohio to New Jersey — excluding the Northeast Extension — could increase from $19.75 for a vehicle with two axles, which includes most cars and light trucks, to $173.80 in 2083, an increase of 880 percent.
Wouldn’t you think that this is an issue for ALL candidates who might actually want to represent the people, like Nader, and not the corporate pols and elites who are profiting from this back room deal?

Whatsmore, Nader is not presenting another bogus plan to have the insurance companies run healthcare (into the ground) and the only way important issues like these get discussed are when he runs and he gets other candidates to respond.

Ralph Nader, the only intelligent, truly intellectual candidate running, is the only one that is standing up to the corporate welfare machine by speaking out for the American people. Unlike the three corporate shills, McClob, Nader is not taking money from special interest groups and PACs. Nader has the conviction to steer this country in the right direction, by ending the illegal war and occupation in Iraq and Afghanistan, troop withdrawal and slashing the military budget, impeaching Bush and Cheney for high crimes and misdemeanors, ending the number one tyranny against the American public brought on by the Insurance Lobby by instituting a Single Payer-Medicare For All, ending corporate welfare and abuse, raising the minimum wage to a livable wage, ending corporate personhood, repealing the Patriot Act, ending GATT and NAFTA, and improving workers rights and labor conditions by slowing down the exodus of our white collar jobs via H-1b.

Ralph Nader recognizes that by ending the two party duopoly and including third party candidates who represents the majority of Americans who demand real change and not some insulting and empty rhetoric of “believing in the promise of hope” from the likes of Obama, Clinton and Mccain, we can begin to take back this country from the hands of the true "evil doers" -- the corporate elite of Dems and Repubs who are increasingly merging into one Big Money Party.
We want and need to hear more from Ralph Nader, and we want him on ballots all across the country and to be included in all national debates, talk show circuits and radio.