Michelle Malkin stoops to new (propaganda) lows in the latest "Keffiyeh Kerfuffle". She's nothing but a MOUTH-piece for Dunkin' Donuts. 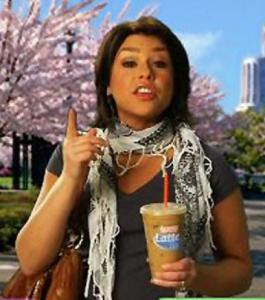 This is Rachael Ray's latest on-line ad for D&D that was just pulled.

Watch out for "Islamic jihad and its apologists" - oh my!

Does Dunkin' Donuts really think its customers could mistake Rachael Ray for a terrorist sympathizer? The Canton-based company has abruptly canceled an ad in which the domestic diva wears a scarf that looks like a keffiyeh, a traditional headdress worn by Arab men. Some observers, including ultra-conservative Fox News commentator Michelle Malkin, were so incensed by the ad that there was even talk of a Dunkin' Donuts boycott. "The keffiyeh, for the clueless, is the traditional scarf of Arab men that has come to symbolize murderous Palestinian jihad," Malkin yowls in her syndicated column. "Popularized by Yasser Arafat and a regular adornment of Muslim terrorists appearing in beheading and hostage-taking videos, the apparel has been mainstreamed by both ignorant and not-so-ignorant fashion designers, celebrities, and left-wing icons."

Keffiyeh: a traditional headdress of Arab men, made of a square of cloth ("scarf"), usually cotton, folded and wrapped in various styles around the head. It is commonly found in arid climate areas to provide protection from direct sun exposure, as well as for occasional use in protecting the mouth and eyes from blown dust and sand.

".....the keffiyeh would later become a trademark symbol of Yasser Arafat."

What-- was Yasser the only guy wearing a keffiyeh at the time??

I guess the keffiyeh serves as a convenient symbol of resistance also??


Here's her Keffiyeh-Kerfuffle piece -- obnoxious as ever.

It appears that Malkin has been a mouth piece for D&D for a while now - She continually praises Dunkin’ Donuts for volunteering to participate in a government database program to verify that workers are here legally:

Lots of other consumers are coming to the same conclusion. Starbucks’ profits are down 28 percent.
So this weekend, I quit cold turkey.
I’m done.
I’ve always liked Dunkin’ Donuts coffee better, anyway. And as unapologetic supporters of immigration enforcement, they deserve your business and mine so much more.
Dunkin’: Tastes good, cheaper, and good for national security. Drink up!
Why I gave up Starbucks (5/5/08)

You gotta wonder how much the Carlyle Group and all the other Dunkin' Friends pay that little bitch.

"I don't recall your name, but your Fez is familiar" 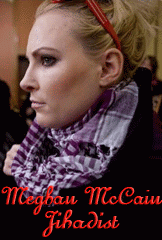 The Dark Wraith at Big Brass Blog alerts us to the fact that Meghan McCain also wears teh garb of the jihadist.