(Hello! Fat Lady Sings here. Liz has kindly invited me to contribute to this fabulous blog. I may not be blond – but this redhead’s on fire!)

Update: I received an email from someone claiming to be Michael Wolff pointing out that I use 'Richard' several times in this essay. Ooops! He got me! Chalk it up to a bad pain day. Most of you know I'm usually vigilant when it comes to details like this - but sometimes, when the pain gets really bad, the back of my brain takes over. I was thinking about the TV pundit Richard Wolff (the Wolff I know best). It just came out - and for that I am sorry. If I'm eviscerating the man - I should at the very least get his name right!

So thank you MICHAEL Wolff for the correction. That took courage.


A few weeks ago I read an article in Vanity Fair that really scorched my shorts. I was so pissed off, I had to think about it a while – let it simmer, so to speak – see if the pot came to full boil. Well it did. I’d say I’m well and truly ‘boiled’ now. In fact – the more I think about it the ‘prime-ier’ I get. Why this particular diatribe? Out of the encyclopedia of ‘I Hate Hillary’s’ littered like smashed walnuts on the side of the road – why did this pop my kettle? The complete and utter denigration and dismissal of women in general. Call it the final straw – the last nail in the coffin – one insult too far. You see - Michael Wolff has declared us over 50 types unfuckable – and you know what that means: invisibility to the point of shunning (he even uses that word!).

Guess we can all go home now girls - at least those of us in what the opposite gender sees as peri-(pathetic) menopause. We are now officially invisible – except for Hillary, of course. She’s still out there - plugging away – but it’s only a matter of time. She’s fading – shrinking towards germ status (with any male handy the prescribed antibiotic). The estimable and oh so quip worthy Mr. Wolff has pronounced her persona non grata, so – behold the unfuckable woman! 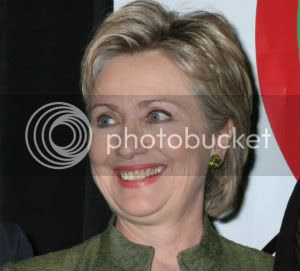 It’s all about the sex, you see:

Sex (sex, not gender) in politics is as significant a subtext as race.

Isn't that special? Michael, honey – you do make a girl swoon! Oh. Sorry. I’m unfuckable – unfuckable women don’t (or can’t – I’m not sure which) swoon. 'Old' women only support Hillary because she's as ‘unfuckable’ as they themselves are. Such a prince, this guy! Such insight!

But wait - there’s more! The candidate most likely to win will do so because fuckable women can imagine him (it has to be a ‘him’, you see) ‘doing it’. Gee – I guess that leaves McCain out.

….in real life everybody is constantly and openly speculating on the sexual nature and needs and eccentricities of every rising and demanding political personality.

It’s a point of identification and differentiation. We vote for or against sex lives.

I don’t care whether you’re for Hillary or against her – its no longer possible to pretend that gender hasn’t entered this election. You know - a couple years back, the UN studied the plight of women in this wide world. Know what they said?:

….women will have to wait until the 25th century, 2490 to be precise, before they can achieve parity with men.

So drop the scales from your eyes, my friends. Wake up and smell the misogyny. Michael Wolff does. Smell things, that is. And what he smells is the aroma of unfuckableness. Hillary obviously isn’t getting any from Bill (did she ever?) – so why vote for her? (Serial adulterers become that way because the women in their lives aren’t fuckable, after all. Everyone knows that!). We want stained sheets in the White House – not brilliant minds. And EVERYONE thinks that way (only secretly, of course):

Although it’s not discussed in reputable commentary, it’s discussed by everyone else: so what exactly is the thing with Hillary and sex, with the consensus being that she simply must not have it (at least not with her husband; there are, on the other hand, the various conspiracy scenarios of whom else she might have had it with).

Except for us dried up old prunes (or as Wolff categorizes us – the ‘sexually desperate’). We want Hillary because her vagina is as dusty and useless as our own. No KY Jelly for you! (Not even the warming kind). Wolff kindly enlightens us on this subject as well – at least where it touches on Hillary and the unfuckables:

I won’t even get into how he labels and denigrates Cindy McCain and Jeri Thompson Kehn (pole dancing, anyone?). Oh – he backs it all up with quotes from other middle-aged white men (Joe Scarborough for one) – but that’s what middle-aged white men do – flock together and compare their diminishing sexuality. It’s ageing roués anonymous – or as my best friend Amy puts it – the dick club (no tits allowed). Of course, the only thing hardening in these guys lately is their arteries – but who cares! They have penises! And we don’t. I can just see those testosterone molecules dashing about – brandishing little swords – making sure not a drop of estrogen remains standing. Of course – no estrogen in the brain means forgetting that tab ‘A’ fits into receptor ‘B’ – but like I said - who cares? It’s possessing the penis that counts – not the ability to use it.

And that’s not even the worst of it. Wolff goes on to say that women are part of a ‘prosecutorial matriarchy’. He sexually fetishisizes middle-aged politicians (a la Elliot Spitzer, whom Wolff at once criticizes and admires) holding them up as the great American arbiter: they act as we all do (or would like to); the ‘we’ being card carrying members of the dick club, I guess. Wolff really feels for fellow middle-aged philanderer Spitzer. He’s pissed off Spitzer didn’t fight getting caught:

Spitzer should have, reasonably, blamed the Bush Justice Department, the Patriot Act, the entire culture of investigation (again, mea culpa, mea culpa), instead of giving in to his own shame. He should have stood up for higher principles.

You have to be particularly shameless, of course, to stand such ground. But shamelessness is what we pay politicians for.

As for the unfuckables? We females who put up with the Elliot Spitzer’s in our lives?:

The result is a consensus on sexual politics that is driven by women, striking in its asperity and lack of generosity.

And Hillary? Well – she’s just Bills ‘beleaguered’ and eminently unfuckable wife. That’s what it all comes back to, you know: Bill – Bill and sex in the Oval Office i.e.: the ever-present and always terrifying ‘Clenis’. Wolff calls Bill Clinton the ‘Amos ‘N Andy of sexual need’. Imagine if he’d used that very same analogy on Barack Obama - Moyers would do a documentary! And Hillary – poor Hillary! That’s what everyone’s saying these days – ‘Poor Hillary’. It’s become almost as ubiquitous as ‘pass the potatoes’. Washington Post writer Libby Copeland calls it “death by condescension”. I say it’s a chuck under the chin complete with lollipop (make mine cherry, please). There just aren’t enough votes to be class president. Tracy Flick will never morph into Elle Woods – too organized, too strident, too needy – not enough flair in all the ‘right’ places. Hillary just doesn’t register on the bimbo meter. No – the only jiggle affecting men when regarding la Clinton is the tweak she gives their blood lust. They don’t just want her gone – they want her dead. Julia Keller of the Chicago Tribune labels it:

….the appalling preponderance of violent, death-infused imagery in conversations about Clinton, smuggled into otherwise ordinary political discourse like a knife taped on the bottom of a cake plate: On CNN, pundit Alex Castellanos said democrats must realize that "it's time to take the family dog to the vet." Matthews' MSNBC colleague Keith Olbermann expressed the hope that "somebody will take her into a room—and only he comes out." CNN's Jack Cafferty gleefully floated the specter of Clinton being run over by a flatbed truck. A recent Tribune editorial compared Clinton to a euthanized Kentucky Derby contender.

So bring out your dead, my friends (especially if that dead is blond and wears a pantsuit)! And all women over 50 please line up for mandatory shunning. Get your unfuckable stamp here – big, red letters (Helvetica, of course – it has to be universally readable). All snark aside – I find everything Michael Wolff said absolutely appalling. And I am shocked beyond words that a so-called ‘woman’s magazine’ actually published such tripe. Oh I know – many will read what Wolff said and label it some form of comedy: ‘he didn’t really mean it’. He was pointing out what OTHERS believe, or have said, or silently think in the long, dark tea-time of their souls. Right. Well I don’t buy that bullshit – not one stinking stone of it. It’s like the guy who says he doesn’t hate Hillary because she’s a woman – he hates her because she’s a bitch. Its bumfuzzel; a distraction – misogyny slipped under the door like so much pornography. Even the brown paper it’s wrapped in carries a stink. And before you dismiss this as the opinion of just one man – have a gander at the links I’ve provided. From Marie Cocco over at The Washington Post to Nina Burleigh of the Huffington Post – note has been taken of what is being said (and what is being ignored) - on all sides. It’s open season on women, my friends. This isn’t just about Hillary; though she’s the current locus. And it really isn’t about politics per se. Obama’s quest for the presidency has unleashed many racist elements in our country – something I predicted, by the way – more than a year ago (An Open Letter to Barack Obama). That certain elements have set these dual hatreds against one another is shameful – but not unexpected. The adage of divide and conquer is as old as civilization – even though as a modern society we should eschew such crap. The politics of exclusion should belong to our historical past. But they don’t – and here we are. No – no matter how you slice it – Wolff and the host of other’s battering Clinton’s gender posses twelfth century beliefs: a woman is only as useful as her vagina. When that dries up – when we become ‘unfuckable’ - we become useless. Discardable. Invisible. Hell - even Match.com has issues!

Well I say hooray The Unfuckables! Bully for us! Michael Wolff doesn’t want us? To hell with him and the old-boy network he rode in on. We unfuckables don’t need your stinkin’ imperator. We do alright on our own, thank you very much. Hey – we oughta band together – don’t you think? Get a website - maybe our own reality show. Loreena Bobbit (bless her sharp little heart!) can be our patron saint. Imagine - hoards of unfuckabe women roaming the countryside like maenads - looking for the men who done them wrong.

It'd be a freakin' apocalypse!

Cross-posted in all the usual places
Posted by TFLS at 3:09 PM