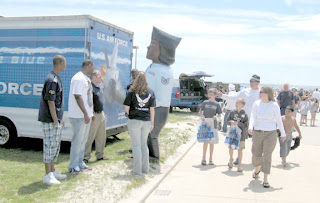 There had to be thousands of enlisted men and women at the air show I attended at Jones Beach on Saturday... and thousands and thousands of veterans there as well. And what a recruiting orgy it was. See that picture above? There was this blow up suit that someone was wearing and it was of a female, African-American Air Force officer. The character walked along the boardwalk enticing youngsters who were just blown away by the coolness of all the war toys they saw doing maneuvers in the sky. I asked a number of people if there were any African-American female pilots and they said yes there were but no one could give me a number. One good thing about being on recruiting duty is that you probably have never seen combat and you haven't been out in the world after serving yet, so you can only tell people what you've been told to tell. "Join us! See the world! Hang out at air shows! Go to college! Get great jobs!"

Would engineers have had the chance to invent such awesome flying machines if not for war. What else could they be used for? Rich people's folly? Transport planes, of course are quite useful for world citizens, but they don't do tricks and blow up stuff. It was mind boggling to think of all the fantastic technology that comes out of the need to kill people in other lands. Couldn't the brain power of such great minds be put to good use in the world? Sure, but the toys wouldn't be so cool.

Could human beings be hardwired to actually want conflict and allow things to progress in such a way that war would be inevitable? Sometimes it seems that way and maybe I'm the weird one who finds it abhorrent.

I do think of all the soldiers that died defending this country. I do honor their memory. Goddess bless them. I think of all those who are still living and served in wars. I honor them too. Maybe the whole war was in vain that they may have fought in, but I'm sure that they died bravely and valiantly and perhaps died saving someone else's life. Even if the war was fucked up, they did what they believed was the right thing to do. Those who will fry in hell for war crimes are those who started the wars and commanded them. (I hope)

I'd like to take time to remember all those vets who are still alive and suffering from PTSD and other battle scars. Their lives have been hell on earth. May they find peace.

I wouldn't be so against war and the military industrial complex if they raised the enlistment age to 25.
Posted by Liz Blondsense at 9:42 AM