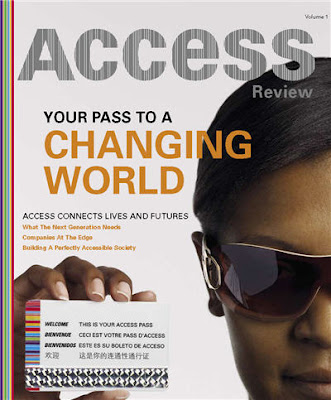 Elites Rule: America’s Have/Have-Not Society, Driving to a Town Near You

Progressive writer and author of the new book World Made by Hand James Howard Kuntsler, who recently appeared on The Colbert Report is an advocate of the choo-choo train. He has written an essay today that explains the need for a transition from our current car culture to riding the rails during this era of peak oil and skyrocketing fuel costs. Everyone I talk to agrees that this would be a great solution to help improve air quality, fuel efficiency and expediency –providing one lives on a rail line and/or has easy access to one. To borrow from my favorite comedian, Stephen Colbert, let’s first define a key word, below.


That’s the ticket! It’s all about access. Before we can talk about access to transportation, let’s take a closer look under the hood of what America’s corporate culture of globalization has really bought us by selling off our white collar jobs to the third world and exactly what we are subliminally being asked when the inventors of new technologies and their hip political enablers ask the rest of us to “sacrifice” on this elitist ruled race to the bottom.


I am as much an advocate of promoting an expansive rail culture over our congested freeway car culture as anyone and could not agree with JHK more on this, as is the case with most, in fact all of the issues he writes about. It is not his analysis of peak oil or the need to wean off a car culture per se that I disagree with; it is rather the curious omission of facts or “connecting the dots” about the pitch for making a massive switch to riding the rails and foregoing semi-affordable land/air transportation that implies that the plebes and not the elites of this country are being asked to “sacrifice” these modes of transportation.


One cannot separate the legally orchestrated annihilation of white collar jobs from the discussion of mass transportation without first understanding why and for whom the train whistle blows. In addition to pal Citizen Carrie’s site Carrie’s Nation, one of the best sites to visit for a regular dose of how our government is legally ridding us of our right to employment and its consequent fallout is Robert Oak’s The Economic Populist that comprehensively debunks the myth of a “skilled labor shortage” by consistently imploring readers to push public awareness of this problem by demanding that lawmakers pass bills in the national interest.


What does economic populism have to do with transportation? Plenty. At no other time in our history have so many people sat idly by as jobs, (increasingly white collar) continue to disappear (and not come back) while prices of goods and services continue to skyrocket. Forget about the subprime mortgage crisis and lack of healthcare or lead tainted and poisonous products…among other things, if you are denied access to employment because a few greedy corporate and beltway elites get to profit by exploiting cheap third world labor at your expense, cars and trains and airplanes become a moot point.


“Curiously” during this election season, I have read several essays that highlight the personal attributes of successful politicians who can essentially sway the masses into believing that what’s good for the golden goose is good for the gander. (Obama, anyone?)


Access to power is the most crucial access of all. Once the golden ropes are opened to power, fuel, food, housing, medical care, and Prada, everything else is a piece of cake. One would think that for the millions of college educated citizens of this country, this would be a “no brainer.” In lieu of access to the power elite, government ought to be able to step up to the plate with protections that include labor, infrastructures, heath, food and safety. But every time I read the otherwise progressive, insightful, spot-on, invigorating observations on peak-oil and the world’s post peak-oil future by writer James Howard Kunstler, I find slight omissions that make his otherwise noteworthy assertions appear to be lacking that leave me questioning his affiliations into the rarified club of elites or want thereof, where the golden rule of admission is to never bite the hand that feeds you or discreetly knowing what not to talk or write about.

“It's not about running out of oil. It's about the instabilities that will shake the complex systems of daily life as soon as the global demand for oil exceeds the global supply.”

He is absolutely right. But what kind of “instabilites” is he referring to and more important, who will they affect? I would welcome further dissertation on what JHK believes this entails. For example, why doesn’t he just come out and say “there is no way that the world’s supply of dwindling resources can sustain global overpopulation” and that wars will always result over control of resources and that the citizens of the United States are considered to have “too much” already and this is the reason that greedy corporate executives are getting our crooked politicians to sell off our jobs, our highways, and our houses and our health to global elites from India, the Middle East and China? I believe that while our jobs continue to disappear, our transportation woes will not be solved by more trains until we stop the bogus claims of skilled worker shortages and stop H1-B legislation that hands our jobs over to those from third-world countries. Let us first be able to afford the goddamn transporation in the place. Horse before cart!

“And that's the worst part of our quandary: the American public's narrow focus on keeping all our cars running at any cost. Even the environmental community is hung up on this. The Rocky Mountain Institute has been pushing for the development of a "Hypercar" for years -- inadvertently promoting the idea that we really don't need to change.”

The Hypercar idea is fine, and it WILL work. Just not for most of us, because as long as the plebes are down with letting these corporate frat boys sell out the nation’s jobs, nobody outside the inner circle will be able to pay for one. The Rocky Mountain Institute is an organization by and for elites who are not speaking to the rest of us. Only elites will have access to these cars, and access to the jobs it takes to pay for them, maintain and operate them. Again, why doesn’t JHK just come out with it?

“The idea that we can become "energy independent" and maintain our current lifestyle is absurd.”

Again, Kuntsler is right, however, we CAN and ARE inventing clean energy alternatives, some with longer roadmaps than others. Although some, like ethanol, are unsustainable, the promise for viable alternative solutions can not be underscored. The question is how viable are these new solutions in the quasi-near term when it comes to sustaining a world population of 6-9 billion people globally? Some will lose. Who will those be?

“The pie-in-the-sky plan to turn grain into fuel came to grief, too, when we saw its disruptive effect on global grain prices and the food shortages around the world, even in the United States. In recent weeks, the rice and cooking-oil shelves in my upstate New York supermarket have been stripped clean.”

Shortages are only the beginning, and again, are only for the plebes. Shortages will not be a problem for connected elites who have decided to sell out the American people in favor of fellow global elites who can move into our foreclosed homes after our politicians have sold off our jobs to them.


Perhaps the only thing the trains will be good for is for the exploding homeless population to ride and live on. And we might even want to rethink pulling vehicles off the production lines since we might need a few more ambulances to carry off all of those millions of American losers who have no access to health insurance to closing hospitals in the next town over since the local hospitals have been shut down and looted by the HMO’s and insurance companies. Now, THAT’s a plan worth writing about!

“We cannot afford to remain befuddled and demoralized. But we must understand that hope is not something applied externally. Real hope resides within us. We generate it -- by proving that we are competent, earnest individuals who can discern between wishing and doing, who don't figure on getting something for nothing and who can be honest about the way the universe really works.”

Well James, “hope” is for free, and who cares whether it resides in us or not? The Republicans, BTW, have got to be laughting their asses off about all of this hope going ‘round. And nooooo, we are NOT “befuddled and demoralized.” This is not some fucking tea party and Kuntsler’s comment smacks of the Obama brand “bitter lite.”

We are “pissed off” that we are being hijacked by a few elites who are handing over our white collar jobs to third world workers who they want to pay a fraction of our wages to so that all they can afford is to ride the choo choo trains. These good old boy elites then can stuff the profits into the bursting seams of their drastically, gastrically bypassed greedy pockets so that they can shove even MORE exotic sushi into their surgically altered faces. Again, I do not disagree with Kuntsler’s premise about the need for more trains. It is just that it would be great if he would first acknowledge the economic populism black out in future essays and lectures because right now, it sounds like he is parroting the slick, subliminal message of the pols and tech energy elites (Gore, Khosla, Pelosi, Tesla Motors execs etc. Obama and their sycophants) who stand to profit from lucrative investments in alternative energy solutions that will in fact compromise living standards as we know them for the plebes (icky screw light bulbs, one of many examples however admittedly minor) while the “connected” shiny, happy people known as “elites” bask in the warm glow of their mega-powered soft lighting at their expense.

Maybe JHK is merely sucking up what’s left of that rarified air in the company of all of these Old King Coles who are muttering the ominous refrain “we must sacrifice” on this race to the bottom. Good for him, nice job if you can get it.

But a few questions still remain, like who exactly gets access to what’s left of the coveted cars, what’s left of the commercial carriers and private jets while the rest of the plebes ride on the smelly trains and busses with dwindling access to jobs, housing and healthcare? What good is transportation of any sort when the big problem that none of the politicians or journalists or writers dare talk about on the talk show circuit is ACCESS to jobs, healthcare and housing? Has one writer landed a talk show guest seat and dared broach the taboo subject of selling out America’s middle/upper class to the third world? How many college graduates in their twenties are now living at home while their college educated parents who are lucky enough to even find suitable employment are working to support them all under one roof? Is this what is meant by “sacrifice”?


Who exactly in the U.S. must “sacrifice” while other connected people go on talk shows praising well connected politicians and executives known for advocating an increase in H-1b visas to sell out what is left of our white collar jobs, only to get book deals that pave the way for more college lecture circuit stints?


I must agree that JHK is indeed onto something, and this kind of access may be the only ticket left in town.