What war? What economy? 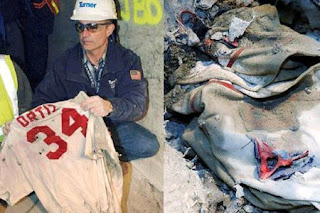 On Saturday, New York Yankees President Randy Levine was forced to face the media. When he approached the microphone with a cold demeanor, the stern look on his face illustrated the seriousness of the situation. “Why reward someone who had really bad motives and was trying to do a really bad thing?” He asked. “We’ll take appropriate action since we do know the name of the individual,” he remarked. He referred to the crime as a “very, very bad act.”

What's really important and really "despicable" in NY at the moment is that a Red Sox jersey was embedded in cement at the new Yankee Stadium construction site. It was planted there by a die hard Red Sox fan, Gino Castignoli, in order to place a "curse" on the Yankees. Construction workers jackhammered for 5 hours on Saturday before unearthing it.

"Castignoli is 46 years old, and has been a Red Sox fan his entire life. He had never wanted to work on the Bronx site, but after he and his friends hatched his master-plot to curse the stadium, he signed on to work for one day. “I would not go near Yankee Stadium, not for all the hot dogs in the world.” Castignoli told the Boston Herald. But the die-hard swallowed his pride for one day so he could attempt to curse the stadium for-ever.

"Yankee fans and officials alike were outraged. Owner Hank Steinbrenner commented that he hoped Castignoli’s co-workers, “kicked the shit out of him.” And the Bronx district attorney has been contacted on matters of criminal charges. In the coming weeks, Castignoli may be faced with criminal charges such as trespassing and defacing private property.

"In his defense, Castignoli remarked, “Anyone with half a brain knows it was all in fun. I didn’t hurt nobody.”"

Castignoli was so proud of what he did, he blabbed it in all the bars in Boston and that's how everyone found out. Talk about half a brain.

Not everyone in Boston and NY are crazed baseball fans.
From the Boston Globe

NEW YORK - It was a 200-mile journey, four hours by bus. But for the 3,000 Boston-area Catholics who traveled to Yankee Stadium yesterday, the spiritual journey was much longer.

"I've had some trouble recently with my faith," said Kristen Darling, a 21-year old student at Anna Maria College in Paxton. But Darling was glad she made the trip with her mother and father. "Today brought me much closer to God," she said.

For many, the trip began at dawn. The sun had just risen over the horizon as 80 Catholics from parishes across the area gathered at Boston College High School to board buses to New York.

Posted by Liz Blondsense at 9:40 AM