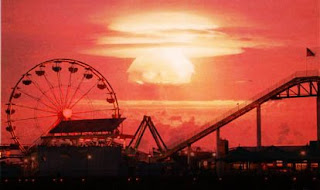 Llewellyn Werner admits he is facing obstacles most amusement park developers never have to deal with – insurgent attacks and looting.

When you are building an amusement park in downtown Baghdad, those risks come with the territory.

Mr Werner, chairman of C3, a Los Angeles-based holding company for private equity firms, is pouring millions of dollars into developing the Baghdad Zoo and Entertainment Experience, a massive American-style amusement park that will feature a skateboard park, rides, a concert theatre and a museum. It is being designed by the firm that developed Disneyland. “The people need this kind of positive influence. It’s going to have a huge psychological impact,” Mr Werner said.

The 50-acre (20 hectare) swath of land sits adjacent to the Green Zone and encompasses Baghdad’s existing zoo, which was looted, left without power and abandoned after the American-led invasion in 2003. Only 35 of 700 animals survived – some starved, some were stolen and some were killed by Iraqis fearing food shortages.

In the years that followed, the zoo and the surrounding al-Zawra park became an occasional target for insurgent attacks. But in recent months, families have begun to return cautiously for weekend picnics. Renovations have already begun on the zoo, with cages being repainted and new animals arriving, including ostriches, bears and a lion.

Mr Werner, who has been sold a 50-year lease on the site by the Mayor of Baghdad for an undisclosed sum, says that the time is ripe for the amusement park. “I think people will embrace it. They’ll see it as an opportunity for their children regardless if they’re Shia or Sunni. They’ll say their kids deserve a place to play and they’ll leave it alone.”

Ali al-Dabbagh, a spokesman for the Government, is equally optimistic: “There is a shortage of entertainment in the city. Cinemas can’t open. Playgrounds can’t open. The fun park is badly needed for Baghdad. Children don’t have any opportunities to enjoy their childhood.” Mr al-Dabbagh added that entry to the park would be strictly controlled.

The project will cost $500 million (£250 million) and will be managed by Iraqis. Under the terms of the lease, Mr Werner will retain exclusive rights to housing and hotel developments, which he says will be both culturally sensitive and enormously profitable. “I wouldn’t be doing this if I wasn’t making money,” he said. “I also have this wonderful sense that we’re doing the right thing – we’re going to employ thousands of Iraqis. But mostly everything here is for profit.”

A $1 million skateboard park, the first phase of the development, will open in July. Parts for 200,000 skateboards and materials to build ramps will be shipped from America to Iraq for assembly at state-owned factories and distributed free to Iraqi children along with helmets and knee pads.

The larger entertainment park, designed by Ride and Show Engineering Inc, will follow in phases, part of a strategy launched two years ago by the Iraqi Government and the US to attract private investment into the country’s 192 state-owned factories.

The factories were closed in 2003 by Paul Bremer, then the head of the Coalition Provisional Authority, who believed that private enterprise would take their place. Instead, industries withered and half a million skilled workers were left jobless.

A task force headed by Paul Brinkley, Deputy Under Secretary of Defence for Business Transformation, is now attempting to revive Iraq’s factories – a task undermined by persistent violence.

But Mr Werner, whose company manages several hundred million dollars of equity, sees Iraq as a great opportunity. “Iraq to me is an open field. I have never in my life seen an opportunity with the potential that Iraq has with its skilled workforce and oil reserves.” He has begun partnerships with several Iraqi factories in the last year, investing tens of millions of dollars in joint ventures. But the Baghdad Zoo and Entertainment Experience could prove the most ambitious. General David Petraeus, head of US forces, is said to be a “big supporter” of the project, according to Mr Brinkley.

“There are all sorts of investment opportunities all over Iraq. But it’s not just hydrocarbons. Half the Iraqi population is under the age of 15. These kids really need something to do,” Mr Brinkley said.

— Before the invasion there were two amusement parks in Baghdad, one in Rusafaa and one in Karf. They now only open on public holidays

— Al-Zawra park and its zoo, (the site of the new park), are among the city’s most popular attractions. There are fountains, sculptures, coffee shops and children’s playgrounds

— The Cross Swords park, a favourite meeting place before the invasion, is now locked inside the green zone

Posted by Liz Blondsense at 7:22 AM