Obama is correct and shouldn't take back what he says 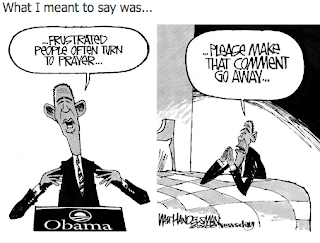 Ahem. Wrong. Obama shouldn't have to take it back. Obama spoke the truth when he said

"You go into these small towns in Pennsylvania and, like a lot of small towns in the Midwest, the jobs have been gone now for 25 years." Obama added that such people are bitter, that they "cling to guns or religion" and have anger toward immigrants and free trade - words seized upon by Hillary Clinton who claims Obama was "demeaning" and "elitist" and "out of touch."

I've spent over a quarter of a century documenting the Americans that Obama describes, in six books and numerous articles. In "Journey to Nowhere," with photographer Michael Williamson, we spent a few years on the road chronicling workers-turned-homeless, hit by the hardest times since the Great Depression. We started in Youngstown, Ohio, where some 40,000 steel-related jobs were lost when mills forever shuttered. The people in "Journey," published in 1985, were the first casualties of deindustrialization.

They never recovered. There's a 600 or so mile-wide swath of the nation, just west of New York City reaching past Chicago and south to New Orleans, bypassed by the so-called boom of the 1990s. In 2000, at the peak of the alleged good times, I traveled across this region and found working people in suburban houses as desperate as the unwilling hobos of the early 1980s.

They were more frustrated than the hobos because they were working full time and still not making it. One woman, Maggie Segura, a Texas state worker and single mom, ended up in a food-bank line because her daughter needed surgery and her health insurance was lousy - the co-payments sent her into poverty. Others worked in the service economy.

Rent or mortgages from escalating housing prices were killing them, and the fact that wages were not rising commensurate to the cost of living. They had empty refrigerators at month's end, children to feed. Their eyes held the desperation of the street. I saw this in home after home. The food banks, facing record demand, could barely help.

Now on the eve of new hard times we must look at the last quarter of a century and ask: Why shouldn't working class Americans be bitter?

The article goes on to explain how xenophobia begins with fear. When you are simply trying to survive, you don't see the real threat- corporate greed. You just see Mexicans. These folks when frustrated don't turn left, as it were. I think it's important for Barack to address this, uncomfortable as it is. continued


From Frustration in lack of control over one's job

The first thing to understand," Michael Zweig [an economist at Stony Brook University who since 1999 has run the Center for Study of Working Class Life] says, "is that there is a working class in this country, and it is not the middle class." He's talking about the 62 percent of the labor force that he calculates are in jobs where workers have little control or authority over their own work. "They are not anybody's supervisor or boss, and their anger is first about not being recognized, feeling as if they don't exist."

"The people Obama was talking about" in remarks in San Francisco about working-class bitterness, Zweig says, "are losing their jobs, seeing good-paying jobs disappear and low-paying and service-sector jobs take their place. When the conversation comes around to their existence, they are often defined out, and we just talk about the middle class."

Working-class studies began taking hold in the late 1990s and early 2000s because of "increased inequality and the increasingly obvious disadvantages that workers have with the reduction in the power of unions and the great increase in executive compensation. People started to ask: What is going on here?"

"We are looking especially at the intersection of class and race," Zweig says. continued

Comment: I have learned so much more this morning about the working class. I knew that they existed, but I have not read about it in the MSM. Obama is not afraid to address it. This needs to be addressed in order to turn things around in our country for so many reasons. First of all, human dignity. Secondly, they will continue to vote right instead of left and against their interests.
Posted by Liz Blondsense at 8:29 AM