I didn't know this 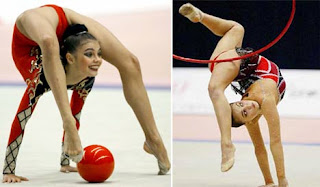 Vladimir "I call him, Vladimir, heh" (Putin) recently split with his wife Ludmilla and is preparing (according to a Moscow paper) to marry a 24 year old Russian gymnast, Alina Kabaeva according to the Daily Mail. That's her on the left. hmmm.

"The speculation may go some way to explaining why Mr Putin suddenly posed topless for the cameras on a Siberian fishing holiday last summer.

While his muscled and hairless torso were a particular hit among female and gay voters, perhaps he was simply trying to impress his new mistress.

There is added piquancy in the fact that, despite her youth, Miss Kabaeva has recently been made an MP.

The gymnast is one of a number of young and beautiful Russian dancers and athletes who, under Mr Putin's patronage, have lately become deputies in the Duma - Russia's lower parliament.

Known as Putinskie Krasotki - 'Putin's Babes' - they were brought in with the cynical but successful aim of 'sexing up' his United Russia party.

The bloc took more than 60 per cent of the vote in the December elections." 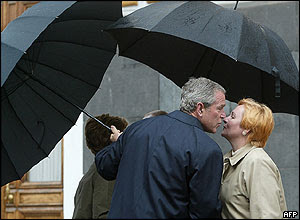 That's your president with Ludmilla.

Hey, I was just thinking. Imagine if one of our politicians dumped his wife for a 24 year old gymnast? It would be an international scandal... probably even bigger than "Nipplegate." This story is barely making headlines. Maybe no one cares about Russia anymore.
Posted by Liz Blondsense at 6:08 AM

Email ThisBlogThis!Share to TwitterShare to FacebookShare to Pinterest
Labels: friday gossip and sex