how green was my zone

From Think Progress: Secretary of State Condoleezza Rice made a surprise visit to Baghdad yesterday, where a ceremony featuring Rice in the Green Zone was delayed by a “duck and cover” alert, “one of several during her six-hour visit to the fortified compound housing the U.S. Embassy and much of the Iraqi government.” There were three separate rocket attacks during her visit. 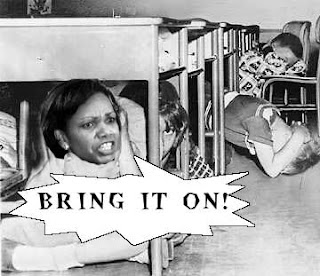 “Secretary of State Condoleezza Rice mocked anti-American cleric Muqtada al-Sadr as a coward on Sunday, hours after the radical leader threatened to declare war unless U.S. and Iraqi forces end a military crackdown on his followers.” Spencer Ackerman remarks, “So Sadr is a coward for making threats from Iran… and Condoleezza Rice is a stateswoman for blustering Sadr into making a move that carries the potential of killing American soldiers.” And VetVoice’s Brandon Friedman comments that this echoes Bush’s “Bring ‘em on” declaration.

Well the good news from Iraq is that Halliburton raked in billions.