The God Particle is Being Studied 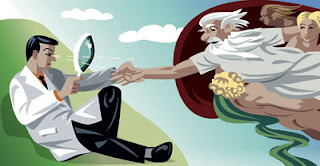 The Economist has an interesting article on the Science of Religion.

The first task of CERN's [the European particle-physics laboratory (CERN) at Geneva] new machine, the Large Hadron Collider, which is due to open later this year, will be to search for the Higgs boson—an object that has been dubbed, with a certain amount of hyperbole, the God particle. The €2m, by contrast, will be spent on the search for God Himself—or, rather, for the biological reasons why so many people believe in God, gods and religion in general. continued

The author says, "Religion cries out for a biological explanation." First evolutionary biologists have to find out which parts of the brain generate religious experiences and determine if they are epileptic seizures. Then there is a study of how religion effects behavior and if it was "invented" because of the long term cooperative benefits of holding a group or a society together (supposedly it does.)

But there's more. And this is an interesting thought:

Dr Wilson himself has studied the relationship between social insecurity and religious fervour, and discovered that, regardless of the religion in question, it is the least secure societies that tend to be most fundamentalist. That would make sense if adherence to the rules is a condition for the security which comes from membership of a group. He is also interested in what some religions hold out as the ultimate reward for good behaviour—life after death. That can promote any amount of self-sacrifice in a believer, up to and including suicidal behaviour—as recent events in the Islamic world have emphasised. However, belief in an afterlife is not equally well developed in all religions, and he suspects the differences may be illuminating.

That does not mean there are no explanations for religion that are based on individual selection. For example, Jason Slone, a professor of religious studies at Webster University in St Louis, argues that people who are religious will be seen as more likely to be faithful and to help in parenting than those who are not. That makes them desirable as mates. He plans to conduct experiments designed to find out whether this is so. And, slightly tongue in cheek, Dr Wilson quips that “secularism is very maladaptive biologically. We're the ones who at best are having only two kids. Religious people are the ones who aren't smoking and drinking, and are living longer and having the health benefits.”

That quip, though, makes an intriguing point. Evolutionary biologists tend to be atheists, and most would be surprised if the scientific investigation of religion did not end up supporting their point of view. But if a propensity to religious behaviour really is an evolved trait, then they have talked themselves into a position where they cannot benefit from it, much as a sceptic cannot benefit from the placebo effect of homeopathy. Maybe, therefore, it is God who will have the last laugh after all—whether He actually exists or not.

Posted by Liz Blondsense at 9:11 AM

Email ThisBlogThis!Share to TwitterShare to FacebookShare to Pinterest
Labels: evolution, religion and science