The Aria of Chris Matthews 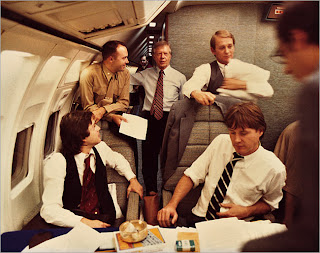 That's Matthews in the bottom right.

In this this coming week's The Sunday NY Times Magazine, Mark Leibovich paints a rather unflattering picture of Chris "Tweety" Matthews (for me.) Well, it's not surprising actually because he is unflattering, narcissistic and sexist. It starts off on the first page describing him as a blow hard, then a "spinner" of news, then a blowhard, then a sexist pig and then self absorbed:

At one point, Matthews suddenly became hypnotized by a TV over the bar set to a rebroadcast of “Hardball.” “Hey, there I am — it’s me,” he said, staring at himself on the screen. “It’s me.”

"...they appeal to the eye-rolling tendencies of a cooler, highly educated urban cohort of the electorate that mostly dismisses an exuberant political animal like Matthews as annoyingly antiquated, like the ranting uncle at the Thanksgiving table whom the kids have learned to tune out."

Matthews told me that the interview was a painful experience. Not only did Stewart humiliate him, but the interview exposed an essential truth that people by and large don’t want to hear advice from politicians, a breed that, in many ways, has defined Matthews’s value system. “I think Stewart was right in that he caught the drift of antipolitics,” Matthews said.

He still can't get over it. Olbermann is much more popular on MSNBC than Matthews thankfully. But still Matthews is pretty impressed with himself:

Matthews appears to be a bit paranoid when it comes to other NBC news guys:

Tim — as in Russert, the inquisitive jackhammer host of “Meet the Press” — is a particular obsession of Matthews’s. Matthews craves Russert’s approval like that of an older brother. He is often solicitous...
[...]
A number of people I spoke with at NBC said that Russert can be disdainful of Matthews, whose act he often sees as clownish. They also told me that Russert believes Matthews is something of a loose cannon who brings him undue headaches in his capacity as NBC’s Washington bureau chief...
[...]
Friends say Matthews is wary of another up-and-comer, David Gregory, who last month was given a show at 6 o’clock, between airings of “Hardball.” It is a common view around NBC that Gregory is trying out as a possible replacement for Matthews...
[...]
Matthews is also aware that little brother Keith Olbermann has become the signature talent of MSNBC. Matthews seems less than thrilled with “co-anchoring” MSNBC’s election coverage with him, as he has done on many nights during this campaign. When Olbermann is on the same set, Matthews appears different — restrained, even shrinking at times. According to people at NBC, Matthews has not been shy in voicing his resentment of Olbermann. Nor, according to network sources, has Olbermann bothered to hide his low regard for Matthews...

Chris Matthews was into politics from a young age.

Chris loved John F. Kennedy in 1960, but wound up falling harder for Nixon by the end and cried when he lost.
[...]
Matthews attended Holy Cross in Worcester, Mass. He studied hard and engaged in long, loud political debates in the cafeteria. His political allegiance evolved from Barry Goldwater to Eugene McCarthy (“just like Hillary,” he says). He also nurtured a passionate affair with television. He loved Johnny Carson... (Also, Matthews added, Carson “had babes on the show.”)

The following year, he was posted in Swaziland, in southeast Africa, where he taught business skills to villagers and rode around on a little Suzuki motorcycle. “He often wore a necktie,” recalls Fred O’Regan, a fellow volunteer.

“I remember we were out hitchhiking once,” O’Regan told me. Matthews started arguing about Nixon and Vietnam. “It was just like watching his show today. Chris would ask a question, then he would answer it himself and then the person was invited to comment on Chris’s answer to his own question.”

Doesn't he sound like "Alex P. Keaton?"He went on to be a speech writer for Jimmy Carter and then Tip O'Neill. Then he was a columnist for the San Francisco Examiner and after that the SF Chronicle. He begged to be on the McLoughlin Group.

Matthews is also quite impressed with who watches him regularly. He "envisions his role in this presidential campaign to that of Eric Sevareid and Walter Cronkite in 1968."

It's no secret that he loves Obama but is terrified of Hillary Clinton (but I wonder if his fear has anything to do with his embarrassment of bashing her husband for 8 years.) At the bottom of page 8 there's more on Matthews' overt sexism... and his lovely wife's take on it:

Matthews vigorously denies the broader charge that he demeans women on the air. “I don’t think there’s any evidence of that at all,” he said at brunch. “I’ve gone back and looked. Give me the evidence. No one can give it to me. I went through all my stuff. I can’t find it.” I mentioned Erin Burnett, and the name landed like a brick on the dining-room table.

Anyway, as Kathleen was saying: “I think it’s pure Chris appreciating a good-looking woman. And from her standpoint it was embarrassing because she wasn’t sure what to do with it.

Her husband jumped in and added that before the Burnett interview, he had “made a decision to do a whimsical Friday-night show.”

“I guess the bottom line is, What does it show?” Kathleen said. “Is it disrespect for women? Objectifying women?”

“Or does it show appreciation for a pretty woman?” Kathleen said. “I think that’s the question.” It was unclear exactly where Kathleen stood on this question. “I think his greatest worry,” Kathleen said, “is that I might watch it on TV and scream at him.” It wasn’t clear in this case whether she did or not.

Kathy began to give her view, but Chris interrupted.

All in all Chris Matthews is pretty darned impressed with himself. Even if I disagree with his politics, his philosophy of life among other things, I'd have to say that he is pretty impressive for him and for what he wants out of life.
Posted by Liz Blondsense at 7:22 AM