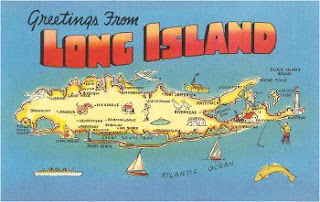 
I had no idea, until today, that on Long Island, where I reside, there is a movement to make this the 51st state. Turns out that we get shortchanged by Albany each year by $2.9 billion dollars which goes to the rest of the greedy ass state. I don't know what they'd do with the money but we are in desperate need of merging school districts or throwing a hunk of money to districts where there is a lower tax base, what with the rise of drive by shootings in those areas and the overall crime in areas where kids are not properly educated. I don't care what anyone says but when the economic and educational conditions are unjust, there is crime. You don't have to be a brainiac to figure that out. Otherwise, L.I.'s one of the safest places to live, if you know where not to take a leisurely drive.

Long Island might just be a little island in the Atlantic, but it packs a punch: Long Island is larger than 19 states and with its population of 2.8 million, has more people than all other American cities, except for the three biggest cities. It measures 1,401 square miles and is the largest island in continental U.S. We have 5 Congresscritters. All are Dems except for Peter King and Felix Grucci.

Well I was thinking of moving anyway. The taxes here are enormous.
Posted by Liz Blondsense at 11:03 AM