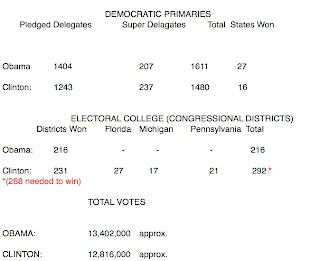 I hate to paraphrase Karl Rove, but the numbers are really important in this Presidential election cycle.

There are some troubling signs in these numbers. Obviously Barack Obama is ahead in pledged delegates, total delegates and popular votes also. This is due to the arbitrary apportionment of delegates by the Democratic Party Rules. (When the total votes split 57% to 33% in a State or district and the number of delegates is 5, you cannot cut a delegate in two or third, so the apportionment goes 3 and 2 which is not a fair split.)

Barack Obama's winning 27 States, does not reflect the electorate. The electorate goes by Congressional Districts: the "big states" as Hillary's supporters chant. Looking at the numbers above, if these Primaries were the national election, Clinton wins 231 Congressional Districts (electoral votes) against Obama's 216. If you add Pennsylvania, Michigan and Florida, with a great probability that Hillary will win all those States (she has already won Florida and Michigan once) then Hillary Clinton wins the Electoral College with 292.

If you add the votes that didn't count in Florida and Michigan, Clinton is ahead in popular votes also.

I don't know if the Super Delegates will decide this election or not. It raises a few concerns, whether the Democrats will win at all in the fall election.

My greatest concern is whether America is ready to elect an African-American President. The last primary in Mississippi is a disturbing clue. Blacks voted for Obama 92% and whites voted 70% for Hillary. If this pattern persists, the Democrats are going to lose in the fall.

My other concern is his affiliation with Reverend Jeremiah Wright and the reverend's "hitler like" oratory, that the Republicans are going to use to scare the living shit out of the white population, making the "swiftboat" ads look like a "walk in the park".

The third concern is this great square mileage support of Obama (if you look at the electoral map) which is probably one inch deep. Although, I understand the people caught up in the movement to have a president outside the traditional establishment, I am not sure if he is the man who can pull it off. He may be, but can I take the chance?

With Hillary Clinton, we know all the pitfalls; the myth, the reality, the distortions. There is nothing new they (the republicans) will use against her.

Perhaps this is just skepticism on my part ( the older I grow, the less I like change), perhaps it's a legitimate concern of mine. I'd like to hear your opinion.

I will vote for a Democrat in the fall, regardless who is the nominee.
Posted by BillyDoom at 4:19 PM