Gun Laws vs. The Madness

First, most of the NRA terrorist enablers in this country will immediately and frothingly screech "Guns don't kill; PEOPLE kill!" in response to this post.

Fuck them. I own guns myself, and I have a 4th Amendment that says what's mine is mine, stays private and you'd better not try to screw with me.

I also have a 1st Amendment, and I'm not afraid to use it.

We have seen cases in just the past few months of people who've gone seriously sideways and started shooting up their places of residence, employment, education, etc. When asked (provided the perpetrator lives past the crime scene), we usually get the answer that the person was:

The Republican-led Legislature of the State of Florida, who dwell within the 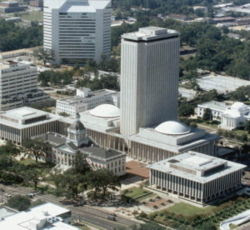 prophetically phallic Capitol Building in Tallahassee, are considering a bill foisted upon them by the NRA and a gaggle of pure psychotics who have apparently lost their senses entirely as well as their faith in institutions such as government, the police and the courts. Apparently believing that we are reverting to the Wild West, the bill would allow employees to take their guns with them to work, so that if someone shows up to start shooting, they can shoot back.

Uh-huh.
Let me lay a smidgen of wisdom down on you - the bulk of the workplace violence in this country comes not from a pissed-off customer, but from the workers in the workplace. That's right; your fellow employees.
It's bad enough that Florida allows anyone who can pass a simple criminal background check to own a concealed firearm (I've read editorial letters from rubes who want us to parade around with firearms openly showing, says it makes for a "polite society"), but we also have a law on the books that says you don't need to run if someone approaches you with a gun. You can stand your ground and shoot them as long as you can articulate that your life was in jeopardy.
I'll have 'OK Corral' for $600, Alex.
With so many people likely to lose even the moiety of their marbles that they still have after endless reruns of 24 and first-person shooter video games (which are dandy at teaching hand/eye coordination, aiming and the use of the one shot-one kill philosophy), what is the NRA driving at by insisting that their paid lackeys in the Legislature drive this bill forward?
Which brings me back to their screeching war cry at the beginning of this post.
Yeah. A gun's a tool, just like a hammer or a typewriter or a computer; it's what you do with it that requires personal responsibility. A gun, though, is the only of those four items that when used properly is designed to kill.
And recall the old adage that if you have a hammer, all your problems look like nails.
If you have a gun, all your problems look like targets.
Posted by Walt at 8:54 AM