Scientists have discovered why female monkeys scream during sex and it's not because their partner is so fabulous:

To investigate the purpose behind these calls, scientists at the German Primate Center in Göttingen focused on Barbary macaques for two years in a nature reserve in Gibraltar.

Scientists are very pleased with themselves. They've finally captured photographs of gorillas having sex face to face.... in front of the kids, no less! 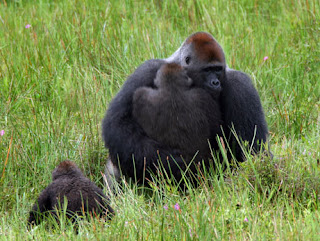