What war? The Integrity of Baseball is at Stake here!

Oh good Lord, break out the violins. This is fucking tragic.

"Can I look at my two children . . . and tell them you have always played the game with honesty and integrity?" asked Representative William Lacy Clay of Missouri to Roger Clemens, as if American family values will face certain extinction if sports heroes don't live up to their projected place high on the pedestal of life.

Can I face my son and tell him that baseball players are an accurate indicator of the status and integrity of the American psyche? Well yes, but I'd have a hard time trying not to laugh cynically while I was saying it. 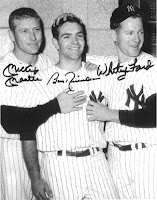 I remember baseball heroes when I was growing up. I lived in Yankee territory. It wasn't until later on that we found out that our heroes and role models were a bunch of wild party boys who smoked and drank and caroused like there was no tomorrow. It was quite surprising given their amazing athletic prowess but they got a pass from the aging fans because it just made them more awesome that they could party and still play like superstars. And they didn't make a whole lot of money either unless they had a lot of product endorsements. They were regular guys with sports talent and thrust into idol status. Poor things. We love to create idols and gods out of other people when we're not inventing incredibly nasty but sometimes merciful sky gods.

Now I am supposed to be surprised that certain athletes use performance enhancing drugs? If they don't live up to public expectations, it could cost them millions of dollars. Talk about raising the stakes to ridiculous heights. It only makes them turn back into mere humans again, doesn't it?

The husband and his friends can sit around for hours talking about Whitey Ford and Mickey Mantle as if it were yesterday. It's like they never grew up. Talk about losing your short term memory as you get older. And Congress critters have apparently forgotten what they were elected to do... you know, uphold the constitution and all that stuff.

Am I the only one who finds Congress' obsession with baseball more than a little disconcerting?
Posted by Liz Blondsense at 9:25 AM