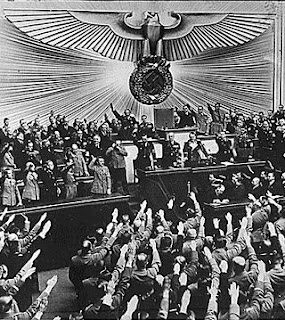 (This rare historical archive photograph shows the United States Senate after passage of the final Enabling Act (known as the FISA Bill With Telecom Immunity) on February 12, 2008. The assembled Senators are shown reaffirming their loyalty to the corporate masters and to Dear Leader.)


Yeah, it's a rampant violation of Godwin's Law, but what the hell? It's appropriate.

Quisling is a proper name, in this case Vidkun Quisling, who as the head of Norway's tiny and ineffectual Nazi Party sold out his country to the Germans in 1940. After his betrayal, the Germans never really trusted him, but his family name has gone down in history as synonymous with traitor.

And now like the names of all the US Senators who voted to pass this benighted, ill-bred abortion of a bill.

By affirming this bill, Senator Dodd pointed out last night, the Senate of the United States once and for all turned its back upon the Rule of Law, apparently preferring the Rule of Men and Rule by Executive Fiat.

News flash - a business is not a person. It has no right, inherent or otherwise, to immunity from any form of civil or criminal liability for its actions. The Senate's actions this week offers a lot of implications - are oil companies going to be made immune if they destroy the environment? Are mining companies to be immune from prosecution if they strip another mountain down to sea level, or logging companies for denuding our remaining forests?

I can only assume one of three things:

1. They are so bed-wettingly afraid of a group of unwashed troublemakers (or of being labeled "soft" on said troublemakers) that they buckled like soggy tacos;

2. They are bought and paid for by the telecom companies; or

3. They were threatened by Dick Cheney, who must have a lot of negatives squirreled away in his safe.

Either way, these so-called Senators (who are OUR employees, by the way) have proven themselves to be spineless weaklings richly deserving the name and dishonor of quisling. I accuse my two Senators, Bill Nelson (D) and Mel Martinez (R) or treason for violating their Constitutional oaths and the will of their constituents.

I will sooner vote Communist than throw away my vote on either of these worthless men.
Posted by Walt at 6:32 PM