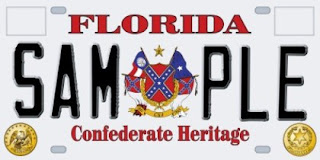 But the controversial nature of the flag and failure to establish a plate before makes for a difficult road to approval.

The plate, featuring four Confederate-era flags as well as buttons worn by soldiers, was designed by the Florida division of the Sons of Confederate Veterans. The group pitched the idea last year and got nowhere. The plate would cost $25 extra and proceeds would be used for education programs and graveyard restoration.

"A lot of people are making a big issue out of it," Brown said. "But all we're doing is giving individuals the right to choose to make a statement about their heritage." That's no different, he said, than people who want to see Martin Luther King Jr's name grace street signs....

Take a moment and chew on that last paragraph. hmmm.

Heritage. I thought Florida was "discovered" by Ponce de Leon. Shouldn't a heritage tag also be offered in Spanish and let's not forget Native American?

I found the comments at the story to be very enlightening. But talk about a divisive issue.
Posted by Liz Blondsense at 7:53 AM