Levite be Gone: Releasing the Samaritan Within. By Jason Miller 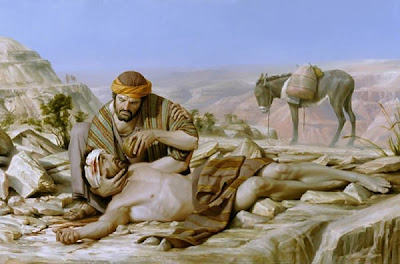 [30] In reply Jesus said: “A man was going down from Jerusalem to Jericho, when he fell into the hands of robbers. They stripped him of his clothes, beat him and went away, leaving him half dead. [31] A priest happened to be going down the same road, and when he saw the man, he passed by on the other side. [32] So too, a Levite, when he came to the place and saw him, passed by on the other side. [33] But a Samaritan, as he traveled, came where the man was; and when he saw him, he took pity on him. [34] He went to him and bandaged his wounds, pouring on oil and wine. Then he put the man on his own donkey, took him to an inn and took care of him. [35] The next day he took out two silver coins and gave them to the innkeeper. ‘Look after him,’ he said, ‘and when I return, I will reimburse you for any extra expense you may have.’

[36] “Which of these three do you think was a neighbor to the man who fell into the hands of robbers?”

Nice summation of the times we live in Mr. Miller. Great commentary and a gentle (not) reminder for the PTB.

(I had to look up a few words before I started reading):

LEVITE:As being wholly consecrated to the service of the Lord, they had no territorial possessions. Jehovah was their inheritance and for their support it was ordained that they should receive from the other tribes the tithes of the produce of the land. (In particular, theLevite Tithe)

Also, be sure to check out the comments that follow -- "shadowdancer" in particular:

Perhaps your a Nation of mostly Religious Political Pharisees? I use the word, Mostly, meaning, not all.
Way back when before all the Tribes were rounded up and put on their Reservations a man of European Heritage visited some Tribes and said, They live like the Bible says to live and they don’t even have the book.
Posted by JerseyCynic at 4:27 AM