Gunga Galunga.... US Pacific Commander in China for Talks

The top U.S. Military Commander in the Asia-Pacific region met with Chinese officials Monday on his first visit since China refused permission for an American aircraft carrier to make a holiday port call in Hong Kong.

Adm. Timothy Keating, head of the U.S. Pacific Command, arrived on his second visit to Beijing since he took up his post in March.

He conferred with Chinese Foreign Minister Yang Jiechi in a closed meeting early Monday. U.S. and Chinese officials did not immediately disclose details of the meeting. He was set to meet with top military officials later Monday before going to Shanghai on Tuesday and then southern Guangdong province.

The visit comes after the Chinese turned away the USS Kitty Hawk and five ships accompanying it for a Hong Kong port call in November. During the same week two U.S. Navy minesweepers were also turned away after seeking shelter during a storm.

China had hinted that its actions were triggered by the U.S. Congress' honoring of the Dalai Lama and U.S. arms sales to Chinese rival Taiwan. China views the Dalai Lama as a "splittist" intent on separating Tibet from China, and views self-governing Taiwan as a breakaway province that it hopes to reclaim. 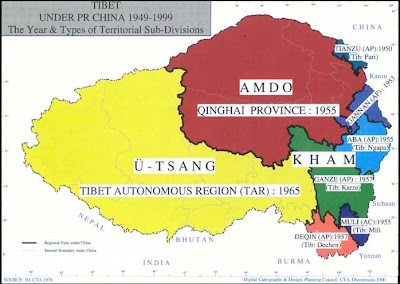 Tibet is today part of the People's Republic of China (PRC) (with a small part, depending on definitions, controlled by India). As an exclusive mandate, Tibet is also officially claimed by the Republic of China (Taiwan). In the Tibetan sovereignty debate, the government of the People's Republic of China and the Government of Tibet in Exile disagree over when Tibet became a part of China, and whether this incorporation into China is legitimate according to international law. Several academic organizations consider Tibet to be part of "South Asia",[1] while UNESCO and Encyclopædia Britannica[2] consider it to be part of "Central Asia".

Keating was to meet Monday with Gen. Chen Bingde, the new chief of general staff in charge of day-to-day operations for the 2.3 million-member People's Liberation Army, Vice Chairman of the Central Military Commission General Guo Boxiong, and Lt. Gen. Ma Xiaotian, deputy chief of the general staff for foreign affairs.

Their discussions were expected to center on China-US military ties, Taiwan and international and regional issues, the official China Daily newspaper said.

"China has a positive attitude toward developing military relations with the U.S. and hopes Keating's visit could further enhance understanding, expand consensus and boost cooperation, so as to promote the steady growth of military ties in the new year," the newspaper said, quoting a statement from China's defense ministry.

China is not our Master - Australia
(that was easy....)

WHoa! Well HELLO Dalai!! Check out what he said on his website:

Dalai Lama Says Successor Could Be A Woman


In the summer, they demanded that all reincarnations of lamas had to win prior approval from the government's religious affairs bureau before being reborn. This is in line with the principle that all religions must operate within a framework controlled by the Communist Party.

Posted by JerseyCynic at 3:26 AM