My Message to Mitt: "You're no Jack Kennedy"

Well then, How about STFU!

Decades After JFK, A Presidential Hopeful Addresses His Beliefs
In his speech on faith and politics in Texas Thursday, Mitt Romney compared his appearance to John F. Kennedy's famous speech to Protestant ministers during the 1960 presidential campaign. Both men were trying to overcome concerns that their religious faiths Catholicism for Kennedy, Mormonism for Romney could hinder their candidacies for president.

But there were differences.

Expressed unequivocal support for separation of church and state.

Addressed specific issues raised by his Catholicism, such as aid to parochial schools.

Answered tough questions from his audience after the speech.

Said religion should play a role in public life.

Made only passing references to issues raised by his Mormon faith.

Did not answer questions after his speech.

"Freedom requires religion just as religion requires freedom. Freedom opens the windows of the soul so that man can discover his most profound beliefs and commune with God. Freedom and religion endure together, or perish alone." 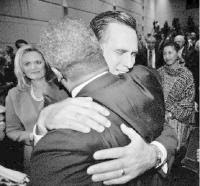 Mitt Romney, center, and the Rev. Jeffrey Brown hug at the George Bush Presidential Library. The GOP presidential hopeful spoke about the role his faith would play if he were elected.
Posted by JerseyCynic at 7:51 AM