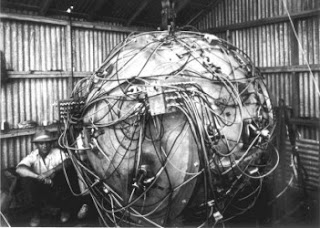 "A little learning is a dangerous thing;
Drink deep, or taste not the Pierian spring."
Alexander Pope

I was rereading The Rude Pundit’s wonderful vodka live-blogging of Dear Leader’s “press conference” back on 12/4/07 when this entry struck me:

“10:11: Iran will be dangerous if they have the knowledge to make a weapon, he reiterates. What the fuck does that even mean? No, really, what the fuck?”

To illustrate just how hard it is to gather the knowledge required to construct a weapon, I shall begin with the opening part of the third episode of Connections, a science series from the late 70s narrated by James Burke.

Looks pretty simple, huh? Let’s dig a bit further into the recesses of the Internets and see what else we can find, shall we?

This is the Wikipedia entry on the nuclear device detonated over Hiroshima in 1945. Again, rather straightforward design; in fact, the Big Brains at Los Alamos (led by J. Robert “Destroyer of Worlds” Oppenheimer) were so damned certain that this design would work that they never tested it until the mid-50s (it was used in the 280mm atomic howitzer).

If you want something a bit more complicated, here’s the Wikipedia entry on the implosion device used on Nagasaki. This basic device became the general template for every bomb we’ve made since.

Okay, so far we have three bomb designs – one theoretical, two actual – but something’s missing. Hmm, what could it be?

There are two items missing. One is the amount of fissile material (either oralloy – highly enriched uranium – or plutonium), and the other is what I call The Final Set of Equations.

Another lighthearted romp down the Internet tubes reveals that for a very basic device you only need 15 kilograms of fissile material. Naturally, the more you have, the more efficient and powerful the weapon, and of course you can stockpile more.

Now we come to the Final Equations, which govern exactly how much material you need. See, the material has to be just subcritical (almost set to go boom); it’s the high explosives that force criticality and cause the necessary chain reaction. These are closely guarded secrets but, again, not an insurmountable problem (unless you suck at math, like I do).

Which leads us back to the Bush press conference. What Bush is apparently saying in his answers is that in order to assuage American concerns about its nuclear program, Iran will have to utterly destroy every structure, wreck every piece of equipment, burn all the papers and lobotomize every scientist and engineer involved in the project since its inception.

And even then you can be sure someone will be missed, someone who keeps the secret of secrets in his brain and only waits for the money, materiel and manpower required to rebuild.

A little learning is, indeed, a dangerous thing.
Posted by Walt at 11:20 AM