Jesus Christ, Christmas is a federal holiday. What more do you want? 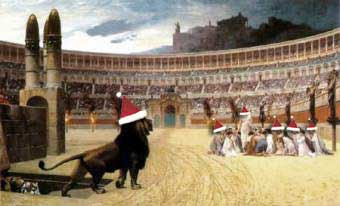 Rep. Steve King [R-IA] wants you to join him in nurturing his inner christian martyr.

What a colossal waste of carbon is the 110th Congress.

Whereas Christmas, a holiday of great significance to Americans and many other cultures and nationalities, is celebrated annually by Christians throughout the United States and the world;

Whereas there are approximately 225,000,000 Christians in the United States, making Christianity the religion of over three-fourths of the American population;

Whereas there are approximately 2,000,000,000 Christians throughout the world, making Christianity the largest religion in the world and the religion of about one-third of the world population;

Whereas Christians identify themselves as those who believe in the salvation from sin offered to them through the sacrifice of their savior, Jesus Christ, the Son of God, and who, out of gratitude for the gift of salvation, commit themselves to living their lives in accordance with the teachings of the Holy Bible;

Whereas Christians and Christianity have contributed greatly to the development of western civilization;

Whereas the United States, being founded as a constitutional republic in the traditions of western civilization, finds much in its history that points observers back to its roots in Christianity;

Whereas on December 25 of each calendar year, American Christians observe Christmas, the holiday celebrating the birth of their savior, Jesus Christ;

Whereas for Christians, Christmas is celebrated as a recognition of God's redemption, mercy, and Grace; and

Whereas many Christians and non-Christians throughout the United States and the rest of the world, celebrate Christmas as a time to serve others: Now, therefore be it

Resolved, That the House of Representatives--

(1) recognizes the Christian faith as one of the great religions of the world;

(2) expresses continued support for Christians in the United States and worldwide;

(3) acknowledges the international religious and historical importance of Christmas and the Christian faith;

(4) acknowledges and supports the role played by Christians and Christianity in the founding of the United States and in the formation of the western civilization;

(5) rejects bigotry and persecution directed against Christians, both in the United States and worldwide; and

(6) expresses its deepest respect to American Christians and Christians throughout the world.

Put this in your friendly, all-American greeting cards to your non-christian friends this year and watch the fun happen. Ho Ho Ho
Posted by Liz Blondsense at 8:28 AM