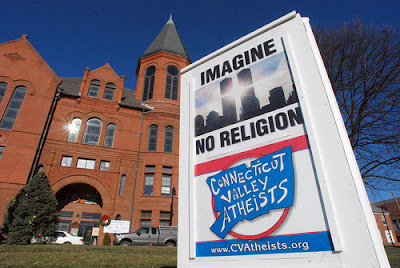 Town officials issued a permit to the atheists to place the sign in the park, effective Dec. 1, to mark the winter solstice. They also issued permits to a group of churches that plan to place a creche in the park, and to a local synagogue, which applied to place a menorah there. The atheists have been the only ones to show up so far.

The town marked off three spots in the park," Himes said. "The notice to groups said first come, first served, so we picked the one right in front of town hall. We fully expected the other displays to be up around the same time we put ours up."

Clergymen at two nearby churches said they aren't bothered by the display.

Still, town officials say they are bothered by the tone of the atheists' message, which they say is political and not consistent with the description listed on their application: "triangular stand displaying information about the winter solstice, Atheism and Human Light observance."

For another read on the same subjectcheck out the ABC local news story:

"I feel like this is an attack on my beliefs as a religious person," said Houser.

"This is an attack," said Houser.

Chennelle and Houser have been fighting back with prayer.

"We ultimately believe that Christians have been persecuted throughout history," said Houser, "so this is nothing new."
Posted by JerseyCynic at 9:25 AM