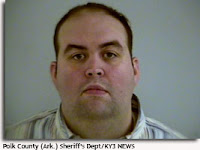 Speaking of nice GOP values and parenting and all that stuff, I was reminded of Mike Huckabee's son David, mugshot pictured on the left, who got a slap on the wrist for bringing a handgun on an airplane (imagine in this day and age, how dense you have to be to bring a gun on a plane) when I read this story about how David in 1998 was a camp counselor and was dismissed for being involved with hanging a stray dog. Nothing became of that incident as Newsweek reports because Governor Daddy Huckabee fired the chief of the state police (he wanted to investigate the incident at the camp.) Gosh, golly, gee wiz. Mike Huckabee ought to write a book on Christian parenting.

"If you're blessed enough to be a theologian AND the governor, Gawd Almighty can help you move mountains when raising a family because your spawn will be let off the hook, again and again. Only by the grace of Gawd Almighty and the religious right voting block could I ever have been so blessed and my son doubly so."

But seriously, what is it with the GOP and animal abuse? Lambert investigates some other stories of interest.
Posted by Liz Blondsense at 7:36 AM