But does it mow the lawn and do laundry? 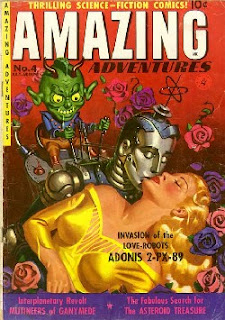 Leave it to our friends across the sea to pick up where we left off before the military industrial complex dictated where the good grant money was for scientists.

Sexbots, not to be confused with sexpots, have been around for a long time, but they just didn't have enough feeling for women to become emotionally involved or all that interested. (If we wanted sex with a robot, we could just start having sex regularly with a human male.) Researchers today aren't too worried about men's enthusiasm for robotic sex since enough men are willing to do it with blow up dolls to make that an industry. 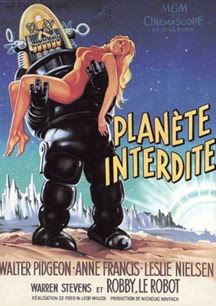 ~snip~
"Levy is an expert in artificial intelligence. He is fascinated with the idea of "love and sex with robots," and his visions of the future include "malebots" and "fembots" as lovers and life partners... Levy, 62, has just published a book, "Love and Sex with Robots: The Evolution of Human-Robot Relationships" -- that is provocative in the truest sense of the word. He is convinced that human beings will be having sex with robots one day. They will show us sexual practices that we hadn't even imagined existed. We will love them and respect them, and we will entrust them with our most intimate secrets. All of this, says Levy, will be a reality in hardly more than 40 years from now."

In 40 years, if I am still alive, a robot will be about all I could get. Guys my age will be deaf and drooling by then.

~snip~
""The mere concept of an artificial partner, husband, wife, friend or lover is one that, for most people at the start of the 21st century, challenges their notion of relationships," says Levy. "But my thesis is this: Robots will be hugely attractive to humans as companions because of their many talents, senses and capabilities." Given rapid developments in technology, Levy believes that it is only a matter of time before machines will be capable of offering human-like traits. According to Levy, "love and sex with robots on a grand scale are inevitable.""

Yes, but will it paint my house?
Will it tell me that I look fabulous without my makeup?
"Your ass looks small and pert in those jeans. Bleep."
"I can't believe you are 90. You could pass for 38. Bleep."

~snip~
""Nowadays, it is relatively commonplace for people to develop strong emotional attachments to their virtual pets, including robot pets," says Levy. "So why should anyone be surprised if and when people form similarly strong attachments to virtual people, to robot people?""

True. True. There are some who love their computers more than people. I find Eduardo, my landscaper to be more useful than those I have relationships with. I haven't even had sex with him. But I digress.

Get out of here! Why are we using devices that make our arms tired in this day and age?

"In a late 17th-century pornographic anthology from Japan, the author read about a "lascivious traveling pillow." The artificial vulva, known as "azumagata" (substitute woman) in Japanese, was made of tortoiseshell and had a hole lined with satin."

~snip~
"But will robotic women and men resemble humans so closely within a few decades that they will pass as an equivalent or even better alternative to a human lover?

"Mimicking human appearance seems to be the least of the challenges. Two years ago, Japanese robot expert Hiroshi Ishiguro unveiled his "Repliee Q1" robot... Thanks to 42 actuators driven by compressed air, the gynoid can "turn and react in a humanlike way," says Levy. "Repliee Q1 can flutter her eyelids, she appears to breathe, she can move her hands just like a human, (and) she is responsive to human touch...," he adds enthusiastically."

But does she cook and watch football without talking?

"Much more difficult than external traits, however, will be the challenging of breathing something approaching a soul into the robots. The biggest stumbling blocks are some of the most fundamental of human behaviors. Current robotic sensors, for example, are incapable of reliably distinguishing between individual people, says Levy. He concedes that if a robot fails to recognize its partner, or possibly even confuses him or her with someone else, the relationship is easily ruined."

Oy vay. If your robot cheats on you... talk about low self esteem.

~snip~
"Nevertheless, Levy predicts that advances will come rapidly. For Levy, imbuing robots with such human traits as empathy, humor, understanding and love is merely a question of technology."

Get out of here! Really? We ought to try that technology with Republicans.

"Empathy, for example, is "essentially a learning task," he says, and therefore "relatively easy to implement in robots." All the machine has to do is observe its partner, make intelligent assumptions about the partner's thoughts and react accordingly."

I don't know about THAT.

~snip~
"Levy sees a future in which artificial intelligence will enable robots to behave as if they had gone through the entire spectrum of human experience, without this actually being the case. He cites emotions as an example. "If a robot behaves as though it has feelings, can we reasonably argue that it does not," he asks? "If a robot's artificial emotions prompt it to say things such as 'I love you,' surely we should be willing to accept these statements at face value, provided that the robots other behavior patterns back them up.""

Maybe they are vacuums?
Posted by Liz Blondsense at 7:28 AM

Email ThisBlogThis!Share to TwitterShare to FacebookShare to Pinterest
Labels: sex