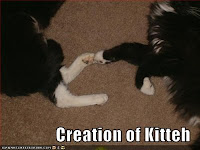 Here’s how to understand the Creation Museum:

Imagine, if you will, a load of horseshit. And we’re not talking just your average load of horseshit; no, we’re talking colossal load of horsehit. An epic load of horseshit. The kind of load of horseshit that has accreted over decades and has developed its own sort of ecosystem, from the flyblown chunks at the perimeter, down into the heated and decomposing center, generating explosive levels of methane as bacteria feast merrily on vintage, liquified crap. This is a Herculean load of horseshit, friends, the likes of which has not been seen since the days of Augeas.

And you look at it and you say, “Wow, what a load of horseshit.”... continued

Scalzi also has 101 photographs up at flicker with hilarious captions which keep you from completely losing your mind when you consider the content of this "museum." 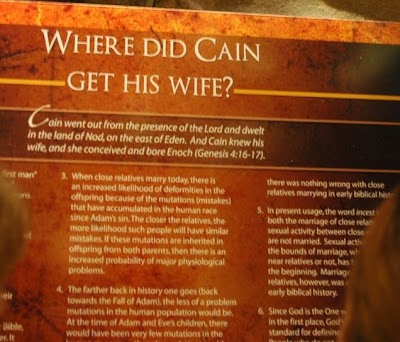 A particular photo intrigued me and when I read what I could (after cropping it and boosting the contrast) from the placard, I was bowled over by the irony. Remember this museum refutes science and evolution yet speaks of mutations!?!?

In part 3, mutations are called "mistakes" that have accumulated in the human race since Adam's sin.
In part 4, It says that the farther back in history one goes, the less of a problem mutations in the human population would be. Then it goes on to say something about incest. I guess it was ok right after teh fall of Adam. click on the pic to see a larger version.

Hat tip to tali for finding the "creation of kitteh"
Posted by Liz Blondsense at 9:08 AM