Christian Archie Comics. Never heard of them. In fact 19 titles were released by Spire comics between 1973 and 1984. I started college in 1973 which would account for my not knowing about these little gems.

I grew up with the sexy Archie Comics in the early 60's and then became a feminist.

Below are some excerpts from Archie's Date Book(1981) (PDF). Date Book's quite a change from the earlier comics in that women are not viewed only as large breasted, vapid, bimbos, yet the message is delivered in a creepy way (if you click on the pics, they should open larger so you can read them.) 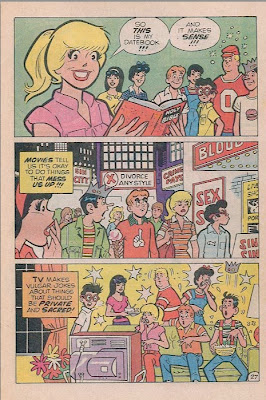 On this page, one of the kids is perusing an adult bookstore in order to look disapprovingly at it. Then you see what happens if you don't sneer at evil things. You end up in the morning after a night of passion with some guy you cannot even bear to look at due to your overwhelming guilt. This is in the bible? I don't think so. Did Lot's daughters look him in the eye the next morning? The strip (I said, "strip," heh) goes on to teach what God really wants. He wants our dates to lead to joy, unselfishness and respect. No shit, Sherlock. But I didn't read that in the Bible. No normal person wants to date in order to feel worse the next day. But as someone who grew up Catholic, playing the God card is often used as a motivator or de-motivator. Fear of hell and all that... 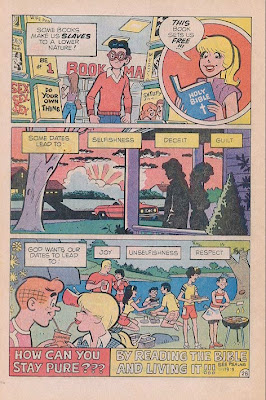 Note that staying pure is the answer. But living the bible? Yikes. Sounds like a lot of battles and anguish.

Below, we see the results of purity in dating.
God's love gets rid of guilt. Wow, he must hate Catholics and Jews.
Going steady with Jesus. Now THAT is blasphemy. I'm sorry. It's like the nuns telling us that they were married to God.
Note that Jughead still prefers food to humans.

Posted by Liz Blondsense at 9:12 AM