This Weeks "Fool on the Hill" 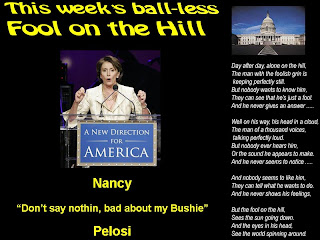 One of the requisites for becoming a Democratic member of Congress is that they have to undergo a Ballectomy. You see, we can’t have any (Democratic) men in Congress with more testosterone or balls than .

Since Rep. Stark was to be censured for having the audacity to bitch about the assholes on the Right and thus offend, by using the obsolete First Amendment for whatever reason American Gladiator Malibu (Nancy Pelosi), she (it) was downright pissed that us Democrats would say naughty things, bad things about the Right. So he agreed to apologize to the poor offended Republicans who can’t take criticism (if they can’t take it from the Democrats, how can the possibly stand up to Al Qaeda?).

With apologies, or not, to Keith, I present this weeks

Fool on the Hill

In another blatant maneuver to get the nation's eye off the ball, Republican obstructionists in the House forced a vote on condemning California Congressman Pete Stark. Aside from being a colossal waste of Congress' time, this blatant show of Republican partisan hypocrisy was an opportunity for Americans to see the minority party at its sickest and most pathetic. Not a single Republican voted for the motion to table this embarrassing resolution. The motion to table (kill) John Boehner's attempt to bring further disrepute to Congress passed 196-173.

You might be interested in knowing that 5 Democrats voted with the Republicans on condemning Rep Stark and another 8-- mostly reflexive reactionaries-- voted "Present," refusing to come to Stark's defense. You can probably guess the names of the disgraceful 13 Democrats. But just in case... the 5 who voted-- as they so often do-- with the GOP:

The 5 worst freshmen, none of whom have earned support from Democrats for re-election, these are the guys who consistently support the Bush Regime agenda inside the Democratic caucus. The 8 who insultingly voted "present," are 6 Bush-Dems and two progressives (Dave Loebsack of and Emanuel Cleaver of Missouri) who probably had their own crazy reasons for their bizarre votes, although in the context of their entire records should just get a role of the eyes and a pass on this. The other 6 are:

After the censure resolution was defeated, Congressman Stark made a dignified apology to those who were offended by his remarks and asked the House to get back to the serious business of getting S-CHIP approved (Thanks to TPM for the clip.)

A Firedoglake reader called Stark's office to complain about the apology. "The person answering the phone told me that Stark had no choice; Stark was told before the vote was taken that should he not apologize, the vote to censure would pass. According to his office, that is the only reason he apologized." Anyone want to guess who forced one of the best congressmen in to humiliate himself and put himself on a level with someone like Mean Jean Schmidt? Was in Rahm? Hoyer? Madam Off the Table?