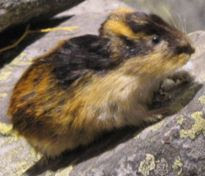 This is the new symbol of the Republican Party. The Norway Lemming (Lemmus lemmus). Cute little bugger, isn't he?

According to myth, lemmings commit mass suicide by leaping off cliffs one after another into the sea or to a similar horrible fate. Kind of like the Republican members of the House and Senate, if you think about it.

Look at it this way: They've stuck like gum to Their Dear and God-Anointed Leader for so long they are fearful of breaking with him too publicly and risk losing their seats; on the other hand they're just as fearful of clinging to Bush too closely and risking being unseated by a Democratic challenger.

SCHIP's an example. Bush's veto was wrong, pure and simple, and made with so little fanfare he might just as well have climbed into Cheney's man-sized office safe to do the dirty deed. The Democratic leadership wants to override the veto (of course).

Bush has offered one of his famous olive branches, saying he's willing to "compromise" (for which read "Democrats, bend over and let me fuck you again").

All of which puts the GOP in both Houses in a quandary. Their leadership right now is urging them to close ranks and continue marching off the cliff like the good little lemmings they are, while their advisers are saying to override the veto so they can get the votes they need to stay in Washington.

Looks like an easy choice to me, since Bush isn't running for re-election.